The Exsultet: Christ Our Light 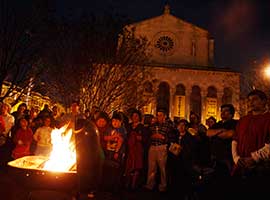 Parishioners gather around the Easter Vigil fire at the at Shrine of the Sacred Heart in Washington on April 3, 2010. CNS photo/Nancy Wiechec

The first major section of the annual Easter Vigil celebration may be the most memorable and engaging to the senses. It certainly includes some vivid symbols and actions which we do not encounter in the liturgy every day. Formerly called simply the “Service of Light”, in the present English translation of the third edition of the Roman Missal this introductory sequence of liturgical elements is entitled “The Solemn Beginning of the Vigil or Lucernarium”. The solemn liturgy begins – usually outdoors – with the blessing of the fire followed by the preparation and lighting of the Paschal Candle. As the candle is being carried in procession into the dark church, all those in attendance are given individual candles which have received their light from the one Paschal Candle. When the Paschal Candle is placed in its prominent candle stand in the church, the church’s lights are turned back on, the candle is incensed, and the deacon (or a priest, or a lay cantor if need be) intones one of the most evocative and poetic hymns of praise in all liturgy: the Easter Proclamation – also known as the Exsultet, named after the first word of the Latin original. The liturgy’s symbolic movement has been from darkness to light; now words and music are used to praise and thank God for what the light represents: God’s saving activity throughout human history, culminating in Christ’s defeat of death and resurrection from the dead. 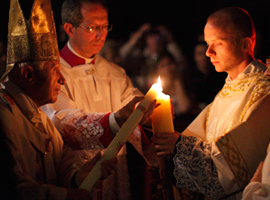 To appreciate fully the function of this great hymn on this most holy of nights, it is important to note that this portion of the Easter Vigil has not always been the only example of a “service of light.” Such services were once commonplace. Imagine how precious a candle, as the only source of light, must have been to families and monastic communities alike as the day came to an end and the sun began to set in Gaul, Spain, and other areas in the early Middle Ages. There were of course no electric street lights, no lamps available at the touch of a switch. Candles were costly, and often a single candle provided the sole source of light throughout the impenetrable darkness of the night. The importance of such a light found liturgical expression in evening lamp-lighting services called lucernaria. In monastic communities these often served as a kind of prelude to all-night vigils, especially on important feast days. The hymn and prayer texts which accompanied the lucernaria made ready use of the solitary light – this one sign of security and hope enclosed by an otherwise dark night – as a symbol of Christ as the light to the world. It is no wonder, then, that a most elaborate Lucernarium came to climax the opening moments of the Vigil of Easter, the most important vigil of the year.

In texts prior to the early Middle Ages, we find that a lengthy prayer of blessing of the candle was used in Rome and in the areas most influenced by Roman liturgy. In areas of northern Europe, however, the practice of a deacon intoning a proclamation of praise in the presence of the Easter Light became customary, and during the course of the Middle Ages, this was eventually imported into regular Roman practice as well. It is quite possible that the earliest of these Easter Proclamations were improvised, but by the Middle Ages the text we now know as the Exsultet became the standard hymn for the Easter Vigil in the West. In fact, in the important and influential Sacramentary compiled from both Roman and Northern European sources for the 9th century court of Charlemagne, we find the Exsultet essentially as we know it today. Despite its antiquity, this 1200-plus year old Latin text is nearly identical to the one in our Missal today, except that the older one is about one third longer. In this early Exsultet, there was an entire long section devoted to a rich symbolism drawn from the activities of bees. In our present version, this has been reduced to two references to the role of bees in the production of the wax which makes up the sacred candle – language which has been noticeably restored in the new English translation of the Exsultet. In Southern Italy during the later Middle Ages the Exsultet was often written out on elaborately decorated scrolls. As the deacon progressed through the long text, the assembly was able to see beautiful illuminations accompanying the various parts of the text. These illustrations on the “Exsultet Rolls” were painted upside down in relation to the text and musical notation, so that onlookers would see the figures right side up as the long scroll unfurled.

Despite its antiquity, this text still serves splendidly as a present-day expression of Easter joy and exuberant thanksgiving. Rich with patristic allusions, the Exsultet also provides a preview of the scriptural and theological themes that will ground the rest of the Easter Vigil liturgy. Salvation history, especially God’s deliverance of his Chosen People from Egyptian slavery and exile are prominent both in the Exsultet, and the extended Liturgy of the Word that will follow it. The text poetically recalls the Passover Feast; the candle present before the assembly is likened to the pillar of fire which guided Israel in its desert journey; their miraculous passage through the Red Sea serves as both a sign of deliverance and as a prefiguring of the waters of Baptism, another prominent element of Easter Vigils both ancient and modern. Having recalled key moments of the Old Covenant, the New Covenant between God and humanity is proclaimed eloquently in terms of the brilliant Light of Christ dispelling the darkness of sin and death for all time. 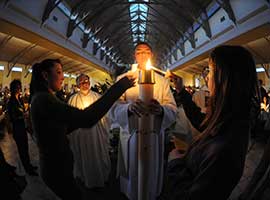 "Be glad, let earth be glad, as glory floods her, ablaze with light from her eternal King, let all corners of the earth be glad, knowing an end to gloom and darkness.”
— the Exsultet

As is fitting for a text of this importance and solemnity, the Exsultet should always be sung – unless singing it worthily would be truly impossible. The chant notation in the Missal is not difficult to sing, but the Easter Proclamation is lengthy, so preparation and practice well in advance is essential. It is also important to take note of the rubrical instructions concerning the Exsultet which are contained in the Missal. Deciding which of the various options best suits a given community and the capabilities of its ministers will go a long way to ensuring a rendition of the Exsultet which is both dignified and evocative of joy. As the rubrics indicate, intoning the Exsultet is primarily the responsibility of the deacon. In the absence of a deacon, it may also be sung either by the priest who is presiding, or by a concelebrant. However, if local circumstances suggest it, the instructions also permit the intoning of the Exsultet by a lay cantor, with certain indicated portions of the text being omitted. Finally, if the length of text proves daunting, the Missal also contains an abbreviated form of the Exsultet. These various options, together with the determination of which ministers will execute them, should be discussed early in the planning stages, and never left to chance at the last minute.

For centuries the Exsultet has served as a liturgical jewel of unsurpassed beauty on this, the “mother of all holy vigils”, as St. Augustine aptly described the Easter Vigil. As the Exsultet exhorts us, “Be glad, let earth be glad, as glory floods her, ablaze with light from her eternal King, let all corners of the earth be glad, knowing an end to gloom and darkness.” May this venerable Easter Proclamation serve us and our assemblies as a genuine expression of Easter hope and joy.