The 2020 Lenten season begins on Ash Wednesday, February 26, for Latin-rite Catholics with Easter Sunday on April 12. 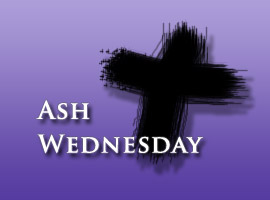 During Lent, we are asked to devote ourselves to seeking the Lord in prayer and reading Scripture, to service by giving alms, and to practice self-control through fasting. Many know of the tradition of abstaining from meat on Fridays during Lent, but we are also called to practice self-discipline and fast in other ways throughout the season. Contemplate the meaning and origins of the Lenten fasting tradition in this reflection. In addition, the giving of alms is one way to share God's gifts—not only through the distribution of money, but through the sharing of our time and talents. As St. John Chrysostom reminds us: "Not to enable the poor to share in our goods is to steal from them and deprive them of life. The goods we possess are not ours, but theirs." (Catechism of the Catholic Church, no. 2446).

Lent is a favourable season for opening the doors to all those in need and recognizing in them the face of Christ."-- Pope Francis

In Lent, the baptized are called to renew their baptismal commitment as others prepare to be baptized through the Rite of Christian Initiation of Adults, a period of learning and discernment for individuals who have declared their desire to become Catholics.

The key to fruitful observance of these practices is to recognize their link to baptismal renewal. We are called not just to abstain from sin during Lent, but to true conversion of our hearts and minds as followers of Christ. We recall those waters in which we were baptized into Christ's death, died to sin and evil, and began new life in Christ.

On these pages, you will find a variety of suggestions and resources to help you "raise up," "sacrifice," and "offer" during this Lent and to embrace your baptismal commitment.

Catholics are also encouraged to make going to confession a significant part of their spiritual lives during Lent.  The U.S. Bishops' statement, "God's Gift of Forgiveness: The Pastoral Exhortation on the Sacrament of Penance and Reconciliation" can be distributed and shared in parishes.  Dioceses are encouraged to make the sacrament available often during Lent and to use these resources to promote participation.  We also have resources to help individuals who have not been to confession in a while "rediscover" the sacrament.