The Roman Missal and the Chrism Mass 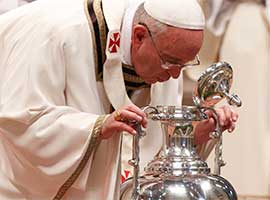 Two new rubrics are inserted indicating that the blessing of the Oil of the Sick and the Oil of the Catechumens and the consecration of the Chrism are done according to the Order described in the Roman Pontifical (CM, no. 2). In our present Sacramentary this rite is found in the appendix. While the rubrics indicate that this Mass is usually celebrated in the morning, indication is given that if it is difficult for the clergy and people to gather then the Chrism Mass may be anticipated on another day near Easter (CM, no.3). Both of these rubrics appeared in the text of the blessing in Appendix II of our present Sacramentary. They also appear in no. 275 of the Ceremonial of Bishops.

The time for the blessing of oils has also been addressed in a newly composed rubric indicating that the blessing of the Oil of the Sick may take place before the end of the Eucharistic prayer. This positioning goes back to the Gelasian and the Gregorian Sacramentaries. Within the Eucharistic Prayer, the greatest prayer of consecration, a new wave of blessing is poured forth on the oil to be used for the sick. The blessing of the Oil of Catechumens and the consecration of the Chrism takes place after Communion. For pastoral reasons, the entire rite of blessing may take place after the liturgy of the word (CM, no. 5).

After the reading of the Gospel, the Bishop is to give a homily. The editio typica tertia is more precise about this than the previous rubric. It indicates : ". . . taking as a starting point the texts of the readings which were proclaimed in the Liturgy of the Word, he speaks to the people and to the priest about the priestly anointing, urging the priests to be faithful in fulfilling their office and inviting them to renew publicly their priestly promises" (CM, no.8). The Renewal of Commitment to Priestly Service remains as it is in the present Sacramentary. 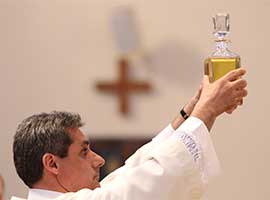 Music for the Preface of the Priesthood of Christ and the Ministry of Priests is provided in place in the Missale Romanum.