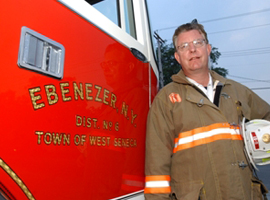 As a follower of Francis of Assisi, I'm challenged to bring joy to a broken and sorrow-filled world. In the days following September 11, 2001, I was challenged to take this ministry to Ground Zero as an emergency services chaplain. The experience changed me, and 10 years later, I still feel the emotion, and tears still come easily.

I was having coffee with my aunt and cousin outside of Albany the morning of 9/11. My father was a Baltimore firefighter who died in the line of duty back in May 1977, and my stomach tightened when news of the World Trade Center first came on the television. My aunt and cousin were panicked as another one of my cousins works only blocks from Ground Zero. We prayed and cried together before I rushed back to Buffalo. Along the highway, I could see emergency vehicles heading toward New York City. At the rest stops, people were huddled around the TV monitors and crying.

The bond among fire personnel is deep and strong. We lost 343 firefighters from the Fire Department of New York that day, which was like a "sword piercing our heart," to paraphrase Mary's feelings at the crucifixion. A particular moment of emotion for me was the funeral of fellow Franciscan and fire department chaplain Father Mychal Judge. I broke down and wept while watching the news coverage during dinner with friends.

When Erie County Emergency Services received the official request for personnel to respond to help at Ground Zero, our commissioner called me and asked me to accompany our fire/EMS personnel as their chaplain and support system. Our convoy of 23 ambulances with crews of volunteers headed down on Sunday, Sept. 16. On our brief stops, people cried, cheered, and wished us well on our journey and mission. This was humbling and moving to say the least.

When we entered New York City close to midnight, smoke hung over the city. Our EMS crews and ambulances were sent in a few at time to do shifts at Ground Zero. I went in with the first crews and remained for the duration of our shift. The destruction, dust, subdued hum of the rescue equipment, as well as the army of police, fire, EMS and so many other professionals working at the site was beyond overwhelming. Tears rolled down my face, mixing with the dust, and my eyes hurt, but nothing as heavy as my heart and inner spirit.

My role as chaplain for emergency services is a "ministry of presence." I roamed around Ground Zero in my turnout gear, speaking to the rescue personnel as they came off the smoking burning pile that was holy ground. I shook hands, hugged, gave bottles of water and often prayed quietly with them. I even mustered some smiles and laughter. I met the CEO of Cantor Fitzgerald, the man who lost over 700 of his staff. I spoke with cops and fire fighters. In true St. Francis of Assisi style, I patted and blessed the rescue dogs as they came off the pile after their shift.

During a break, some of us visited one of the World Trade Center buildings still standing and still safe, despite its windows being blown out. This spot allowed us to go up a floor or two and literally look down into Ground Zero. Here, I stopped my friends and said that I needed to pray for Father Mychal Judge. They instinctively huddled around me, joining hands, and surrounded me in support. I prayed quietly, then openly and I wept.

This experience changed me in some ways. I'm still a sinner, still a bit of a workaholic, still at times trying to "save the world, with my messiah complex." But this tragedy and the humbling opportunity to minister at Ground Zero made me reflect lots on the gift of life, relationships, on making every day good in some way and using the opportunities and gifts God pours upon us. It made me be more conscious of trying "not to sweat the small stuff" as my father had taught me. Life is so precious and yet so fragile. A hug, a smile, an embrace, a kind word, a strong or gentle handshake – all took on new meaning for me.

In the days following the tragedy, some said they saw the face of the devil in the smoke at Ground Zero. Many asked me about the same, and my answer hasn't changed in 10 years. No, I did not see the devil's face at Ground Zero. I saw the face of God in the people working, caring, sweating, crying, rescuing, recovering and being very spiritual in their very humanness. I was moved and changed and felt God's hand in the goodness that followed such tragedy. My ministry embodied the prayer of Saint Francis, "Lord, make me an instrument of your peace."