This year Pope Francis canonized Saint John XXIII and Saint John Paul II. Both made immense contributions to the social teaching of the Church on the dignity of labor and its importance to human flourishing. St. John Paul II called work "probably the essential key to the whole social question" (Laborem Exercens, No. 3) and St. John XXIII stressed workers are "entitled to a wage that is determined in accordance with the precepts of justice" (Pacem in Terris, No. 20).

Pope Francis added to this tradition that work "is fundamental to the dignity of a person.... [It] 'anoints' us with dignity, fills us with dignity, makes us similar to God... gives one the ability to maintain oneself, one's family, [and] to contribute to the growth of one's own nation." Work helps us realize our humanity and is necessary for human flourishing. Work is not a punishment for sin but rather a means by which we make a gift of ourselves to each other and our communities. We simply cannot advance the common good without decent work and a strong commitment to solidarity. 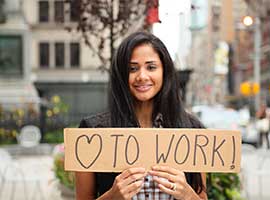 Labor Day gives us the chance to see how work in America matches up to the lofty ideals of our Catholic tradition. This year, some Americans who have found stability and security are breathing a sigh of relief. Sporadic economic growth, a falling unemployment rate, and more consistent job creation suggest that the country may finally be healing economically after years of suffering and pain. For those men and women, and their children, this is good news.

Digging a little deeper, however, reveals enduring hardship for millions of workers and their families. The poverty rate remains high, as 46 million Americans struggle to make ends meet. The economy continues to fail in producing enough decent jobs for everyone who is able to work, despite the increasing numbers of retiring baby boomers. There are twice as many unemployed job seekers as there are available jobs, and that does not include the seven million part-time workers who want to work full-time. Millions more, especially the long-term unemployed, are discouraged and dejected.

More concerning is that our young adults have borne the brunt of this crisis of unemployment and underemployment. The unemployment rate for young adults in America, at over 13 percent, is more than double the national average (6.2 percent). For those fortunate enough to have jobs, many pay poorly. Greater numbers of debt-strapped college graduates move back in with their parents, while high school graduates and others may have less debt but very few decent job opportunities. Pope Francis has reserved some of his strongest language for speaking about young adult unemployment, calling it "evil," an "atrocity," and emblematic of the "throwaway culture."

Meaningful and decent work is vital if young adults hope to form healthy and stable families. Work and family life "must be properly united and must properly permeate each other. In a way, work is a condition for making it possible to found a family, since the family requires the means of subsistence which man normally gains through work" (Laborem Exercens, No. 10). Research is bearing out the consequences of neglecting this relationship: marriage rates have declined by close to 20 percent in the last 40 years, and the birth rate is the lowest on record. Among young adults, the decline in marriage has been steeper, at 40 percent. Although not the only reason, many young adults, because they are unable to find decent work, are delaying marriage and starting a family.

Our challenge this Labor Day is to rise to the challenge of solidarity posed by Jesus when he commanded, "[L]ove one another. As I have loved you, so you also should love one another" (Jn 13:34). The Catechism of the Catholic Church teaches, "Socio-economic problems can be resolved only with the help of all the forms of solidarity: solidarity of the poor among themselves, between rich and poor, of workers among themselves, between employers and employees in a business, solidarity among nations and peoples" (No. 1941). Since each of us is made in the image of God and bound by His love, possessing a profound human dignity, we have an obligation to love and honor that dignity in one another, and especially in our work.

What would our communities, parishes, and country look like if we all recommitted to each other and the common good? If, instead of lamenting the dwindling hopes of our young people, we create institutions, relationships, and an economy that nurture human flourishing? If, instead of bickering about ideologies, people acknowledged the human dignity of others and worked together?

At their best, labor unions and institutions like them embody solidarity and subsidiarity while advancing the common good. They help workers "not only have more, but above all be more... [and] realize their humanity more fully in every respect" (Laborem Exercens, No. 20). Yes, unions and worker associations are imperfect, as are all human institutions. But the right of workers to freely associate is supported by Church teaching in order to protect workers and move them--especially younger ones, through mentoring and apprenticeships--into decent jobs with just wages. 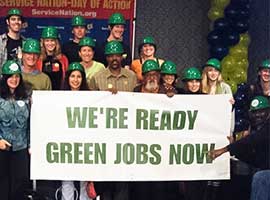 As a nation of immigrants, we recognize that a vibrant and just economy requires the contributions of everyone. Those who come seeking decent work to support their families by and large complement, rather than displace, American workers. But we need to fix our broken immigration system to stop the exploitation and marginalization of millions of people as well as address the development needs of other countries. In doing so we would also level the playing field among workers, provide more opportunity for all who can work, and bring about a needed "change of attitude toward migrants and refugees" (Pope Francis, Message for the World Day of Migrants and Refugees).

In doing this we follow the lead of Pope Francis in rejecting an economy of exclusion and embracing an authentic culture of encounter. Our younger generations are counting on us to leave them a world better than the one we inherited.

The Joy of the Gospel (Evangelii Gaudium) is the long-awaited teaching of Pope Francis on the proclamation of the Gospel. Pope Francis is calling upon the Church and the world with encouragement to begin a new chapter in evangelization. This dynamic document is written in the plain, everyday language for which the pope has become famous.