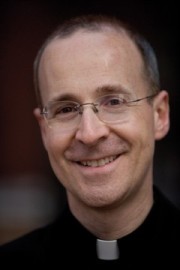 On the morning of Sept. 11, 2001, I was working at my desk at America magazine in midtown Manhattan. Around 9 a.m., my mother called from Philadelphia to say that she had heard about a plane crashing into the World Trade Center. I thought it was odd that she would call; she knew that my office was uptown, not downtown. A few minutes later, I decided to turn on the television set. It was only then that I saw the unfolding tragedy.

That morning I had a doctor's appointment and so, still unsure of what exactly was happening, I walked the few blocks to his office. But as I peered down Sixth Avenue (a few feet away from our office) I was horrified to see the Twin Towers with inky black smoke pouring from their tops. Even then, panicked people were streaming uptown, desperately trying to use their cell phones (many of which had ceased to work since the cell phone towers at the World Trade Center had been rendered useless). Numbly, I made my way to my doctor's appointment.

An hour later, the scene was utterly different. Everyone's eyes faced downtown. People were weeping in the streets, scanning the skies for another plane, racing toward subway entrances and desperately hailing cabs.

When I returned to our offices, our receptionist told me that one of the buildings had collapsed. "That's ridiculous," I said, angrily. "What radio station is saying that? That's impossible." Turning on the television confirmed my worst fears.

That evening, I put my collar on and made my way to a local hospital a few blocks away, where victims were to be brought. But the police officers in the lobby suggested that I walk farther downtown. So through the empty streets, I walked to Chelsea Piers, a large sporting arena, to wait for victims who never came.

The next day I spent several hours at a family counseling center downtown, helping family members pore through hospital records of patients who had been admitted. But, in the end, there would be few survivors.

Finally, on Sept. 13, I returned to Chelsea Piers and asked a police officer if they needed any help downtown. He nodded curtly, waved for a police cruiser, and I jumped in and was taken down to "the site."

It was an absolutely appalling sight — the colossal, twisted buildings still on fire, piles of rubble covered with a heavy layer of gray ash, and hundreds of uniformed firefighters and police officers seemingly everywhere. Ten years later I can still remember the terrible acrid smell that pervaded everything. I felt like I was in hell.

After emerging from the police car, stunned, I wondered what to do. I thought: I cannot bear to look at bodies, I cannot bear to be in the morgue, but I can help the rescue workers. So I spent the next few days and weeks, in between my work at the magazine, ministering to the rescue workers — firefighters, police officers, EMTs, nurses, construction workers, military personnel and government workers from every conceivable office. In time I was joined by my Jesuit brothers, many of them still in training.

In this hell I found grace. Working at the World Trade Center was one of the most profound experiences of the Holy Spirit I've ever had, for there I encountered an overwhelming sense of charity, unity and concord. Every person working at Ground Zero was "other-directed." Every person was selfless, utterly unconcerned for himself or herself. Every person seemed kind, considerate, loving.

All of their work, of course, was deeply informed by the sacrifices that had already been made by the firefighters and rescue workers who gave their lives as they raced into the burning buildings on September 11. For me, it was as if God was offering us a parable. In the Gospels, when people asked what God or the Kingdom of God is like, Jesus offered them a parable, a story drawn from nature or everyday life to help them understand things more deeply. Jesus would say: God is like the father welcoming back his son. Or: God is like a woman sweeping her house.

And here was God offering us a parable today. As I looked around at the rescue workers, I thought, what is God like? God is like the firefighter who rushes into a burning building to save someone. That's how much God loves us. And I saw this love expressed in the great charity of all the rescue workers who gathered at the American Golgotha.

So for me, the experience of September 11, 2001, was not simply one of tragedy but also of resurrection. For me it embodied the Christian mystery of the cross: the place of unimaginable tragedy can also be the place of new life that comes in unexpected ways.

Father James Martin, SJ, is a Jesuit priest, culture editor of America magazine, and the author of several books, including Searching for God at Ground Zero.