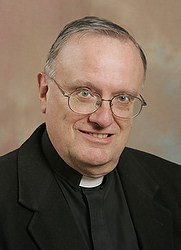 It was a picture perfect day when I returned to my rectory after a number of communion calls. On my way to the last one, our parish deacon met me and said he had heard that a small plane had crashed into the World Trade Center.

At home, I could sense that things were much more serious. I went to the school and met with the principal who described the events that were developing. Our concern was to provide the children with as much normalcy as possible since the children had not heard the news nor seen anything yet. We had just hired a nurse psychologist for our school and this was to be her first day. With the help of the nurse, both the principal and I prepared for how to deal with the news of either deceased or missing parents. Fortunately, the windows of the school faced away from New York.

I went with our maintenance man to the roof and there before my eyes I could see the Towers engulfed in flames and then, as if made of matchsticks, one of them completely imploded. The rush of emotions is beyond words, and it struck at the very depths of my being.

We were successful in keeping the children in school until dismissal that day. Only one parent insisted on taking a child home. We wished to avoid children being placed in front of TV and traumatized by seeing the events over and over again.

At lunch time, I returned to the rectory, and just then an American fighter plane zoomed low. Questions raced through my mind. Were we suddenly at war with some country actually attacking us? The news indicated that people were walking across the main bridges from New York. One person appeared in our rectory completely covered with white powder. She was not a parishioner, but she needed to talk before going home.

We decided to have exposition of the Blessed Sacrament. People flocked to the church. It was here that we had the initial contact with a newly married man at whose wedding I had presided. His wife would never be found. She had called her husband on her cell phone to announce the plane headed for her office. The evening before, she had announced she was with child. Another mother from the parish would never be found, and the body of a father who was a policeman would eventually be found. We held many funerals for police and fire persons who gave their lives.

The readings in the week following these events were filled with statements about the consolation and strength God wished to offer his people. These were comforting words at a time when absolutely everything seemed to have been thrown up in the air. Any tranquility or self-confidence individuals or the nation had as a whole was shaken to its roots.

One of the transforming experiences of these sad days was that everyone really had to ask themselves what was important in life. Certainly the normal things that we get so excited by were all cast aside by the magnitude of what had happened. The preciousness and also the precarious and vulnerable nature of the fundamental gift of life burned its way into the depth of our souls.

I suppose for this reason, it took me quite some time before I could visit Ground Zero and look down at it from the street. Even more traumatic for me was when we made the pre-visit for Pope Benedict's projected visit. Cardinal Egan told me about his own experiences of 9/11, and we both realized how we had been transformed by that day. But it was with some trepidation that I stood at Ground Zero as Pope Benedict lit a candle and then knelt in quiet prayer for a few moments. He was surrounded by so many that had lost loved ones. His presence, however, gradually brought a sense of peace that was hard to describe. The wounds were still there but a true healing process had begun.

A lesson learned from the whole experience was the realization that we ought not to cling to too much, although that is a constant struggle. In a moment, everything in our lives can be thrown up in the air and without a clear sense of what can truly survive. The way forward can be almost impossible.

Finally, 9/11 led us all into the very depths of the mysteries of human suffering, death and resurrection. We discovered that we cannot obtain nor find all the answers to the atrocities we experienced. Yet with God's grace we also experienced the height of human sacrifice and the ability of our brothers and sisters to manifest heroic love. Ultimately we will have the answer to our questions and the reconciliation of all the forces of those days when we ourselves enter into the mysterious inner life of God's self. Only there will the mysteries of the 9/11 experience be revealed.

Msgr. Anthony Sherman is a priest of the Diocese of Brooklyn and former director of the Secretariat of Divine Worship at the United States Conference of Catholic Bishops.