The Church’s ministries of healing, education, and social services bear witness to Jesus Christ and build up the common good. Church institutions are not mere providers of social services. They are expressions of Christian ministry dedicated to human flourishing. We serve all people, without regard to race, sex, religion, or any other status, because God has imbued every person with inherent human dignity. Most Americans understand that mission-driven organizations should be free to operate in accordance with their missions. But a recent rule proposed by the U.S. Department of Health and Human Services (HHS) would prevent Catholic hospitals, clinics, assisted living facilities, and health care workers from carrying out their work. HHS needs to hear your opinion by October 3rd, so take action today!

The HHS rule implements the nondiscrimination provision of the Affordable Care Act, Section 1557. It protects people from discrimination on the basis of their sex in health care. But HHS interprets Section 1557 to impose new mandates about gender identity. According to the new rule, it would be considered discrimination for a health care worker or Catholic hospital to object outright to performing gender transition procedures, regardless of whether that objection is a matter of religious belief or clinical judgment. The proposed rule also suggests that the government may refuse to honor the right of health care workers and providers not to perform or participate in abortions. The proposed HHS Section 1557 rule could function as both an abortion mandate and a gender transition procedure mandate.

Objection to gender transition is not discrimination.

All people should be treated in accordance with their God-given dignity, and no individual should be denied health care because of his or her sex. Most people understand that when medical professionals determine gender transition procedures—such as the administration of puberty blocking drugs or surgery to remove healthy body parts—to be harmful, they are making clinical judgments, not discriminating against persons. A study commissioned by the USCCB found that 70% of registered voters recognized that objection to the procedure is not discrimination.

No protections for health care workers to oppose abortion and gender transition procedures.

Although the proposed regulations say that HHS will consider whether conscience and religious freedom laws apply, the regulations offer no assurance that HHS will ever agree that anyone has the right to follow their beliefs or convictions. In fact, HHS is currently fighting court rulings that hold that HHS violated religious freedom laws the last time they tried to impose this mandate.

Health care workers and religious facilities must be free to conscientiously object to these procedures.

Pope Francis has frequently defended the rights of medical professionals to conscientiously object to harmful procedures.  Most people agree with the Church on this issue. 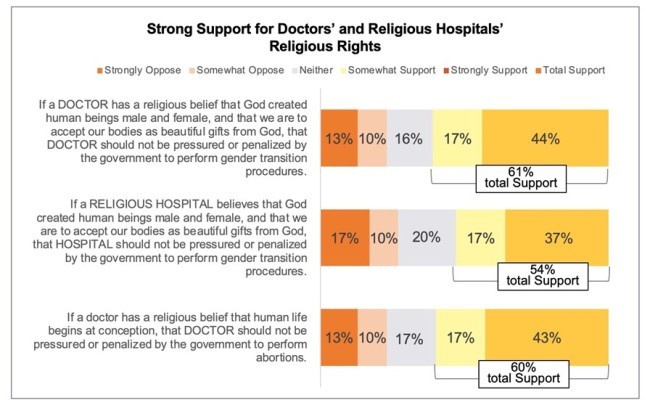 The United States Conference of Catholic Bishops is vigorously opposing the provisions in the rule that do harm to life and religious liberty.  All Catholics and people of good will can help.  Join the USCCB in encouraging the HHS to clarify that “discrimination on the basis of sex” is not an abortion mandate, and that health care workers and medical facilities must be free to conscientiously object to gender transition procedures.  Urge HHS to Do No Harm to Life and Liberty!