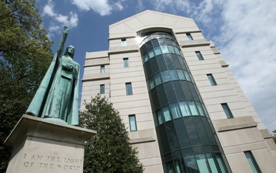 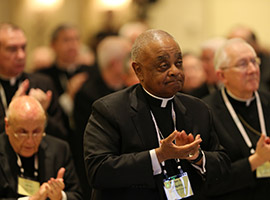 The United States Conference of Catholic Bishops (USCCB) is an assembly of the hierarchy of the United States and the U.S. Virgin Islands who jointly exercise certain pastoral functions on behalf of the Christian faithful of the United States. The purpose of the Conference is to promote the greater good which the Church offers humankind, especially through forms and programs of the apostolate fittingly adapted to the circumstances of time and place. This purpose is drawn from the universal law of the Church and applies to the episcopal conferences which are established all over the world for the same purpose.

The bishops themselves constitute the membership of the Conference and are served by a staff of approximately 315 lay people, priests, deacons, and religious located at the Conference headquarters in Washington, DC. There is also a small Office of Film and Broadcasting in New York City and a branch office of Migration and Refugee Services in Miami.

The Conference is organized as a corporation in the District of Columbia. Its purposes under civil law are: "To unify, coordinate, encourage, promote and carry on Catholic activities in the United States; to organize and conduct religious, charitable and social welfare work at home and abroad; to aid in education; to care for immigrants; and generally to enter into and promote by education, publication and direction the objects of its being."

The USCCB Statement of Mission

Brief History of the USCCB

In 1917 the bishops of the U.S. formed the National Catholic War Council (NCWC) to enable U.S. Catholics to contribute funds and commit personnel to provide spiritual care and recreation services to servicemen during World War I. In 1919 Pope Benedict XV urged the hierarchy to join him in working for peace and social justice. In response, the bishops organized the National Catholic Welfare Council in 1919 and set up the first Administrative Committee of seven members to handle the Council's business between plenary meetings. At that time the headquarters were established in Washington, DC and a general secretary with some staff was appointed.

The word "Conference" soon replaced "Council" in the organization's title, underlining the fact that it was consultative rather than legislative. At the same time, in 1922 the National Catholic Welfare Conference was created to address such concerns as education, immigration and social action.

This model continued until 1966 when the National Conference of Catholic Bishops (NCCB) and the United States Catholic Conference (USCC) were established. The NCCB attended to the Church's own affairs in this country, fulfilling the Vatican Council's mandate that bishops "jointly exercise their pastoral office" (Decree on the Bishops' Pastoral Office in the Church, #38). NCCB operated through committees made up exclusively of bishops, many of which had full-time staff organized in secretariats. In USCC the bishops collaborated with other Catholics to address issues that concern the Church as part of the larger society. Its committees included lay people, clergy and religious in addition to the bishops.

On July 1, 2001 the NCCB and the USCC were combined to form the United States Conference of Catholic Bishops (USCCB). USCCB continues all of the work formerly done by the NCCB and the USCC with the same staff. The bishops themselves form approximately 17 committees, each with its own particular responsibility.

The staff work is overseen by the General Secretariat.