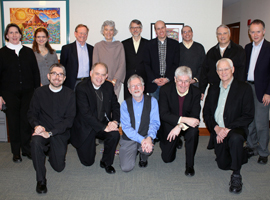 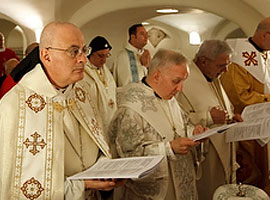 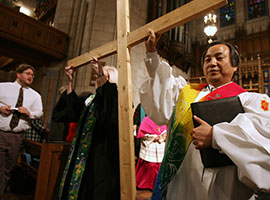 Links to Other Documents and News Releases

The Current State of Ecumenical and Interreligious Affairs,June 2013
Speech of Bishop Madden to the Tantur Ecumenical Institute

Mission of the Joint Committee of Orthodox and Catholic Bishops, May 24, 2016
Message on the Holy and Great Council, May 24, 2016
Message on the Humanitarian Crisis in the Middle East, May 24, 2016
Statement on Catholic-Orthodox Dialogue at the Dawn of a New Millennium, October 4, 2000
Communique on Eastern Europe, October 2, 1992
Statement of Support for the Historical Christianity in Eastern Europe and the Former Soviet Union, September 19,1991
A Pastoral Statement on Orthodox/ Roman Catholic Marriages, October 5, 1990
Ordination, October 1, 1988

Journeying Together in Christ: The Journey Continues. The Report of the Polish National Catholic-Roman Catholic Dialogue 1989-2002. Edited by Most Rev. Robert M. Nemkovich and Most Rev. James C. Timlin. Huntington, Indiana: Our Sunday Visitor Publishing Division, 2003.

Response of ARC to the ARC International Commission's "The Gift of Authority" , March 29, 2003

Five Affirmations on the Eucharist as Sacrifice, January 6, 1994

How Can We Recognize "Substantial Agreement"? April 5, 1993

Anglican Orders: A Report on the Evolving Context for their Evaluation in the Roman Catholic Church, May 8,1990

Statement on the Ordination of Women, November 7,1975

ARC IV Statement on the Eucharist May,1967

The Hope of Eternal Life, 2010
Dialogue centered around human death and the promise of eternal life

The Church as Koinonia of Salvation, 2004
Dialogue centered on koinonia ecclesiology

Teaching Authority and Infallibility in the Church,1978

The Eucharist,1967
Dialogue concerning the Eucharist as sacrifice and Christ's presence in the sacrament

One Baptism for the Remission of Sins,1966
Statement of substantial agreement between traditions regarding baptism from Bishop T. Austin Murphy and Dr. Paul C. Empie

This Bread of Life: Dialogue on the Eucharist and the Lord's Supper, November, 2010

The Common Agreement on Baptism, November 16, 2010

Laity in the Church and in the World: Resources for Ecumenical Dialogue. Washington, DC: United States Catholic Conference Publications, 1998.

Partners in Peace and Education, 1985

Ethics and the Search for Christian Unity, 1980.

Statement on Revelation, Scripture and Tradition,1966

Heaven and Earth are Full of Your Glory, 2012
On the Eucharist and Ecology

Through Divine Love: The Church in Each Place and All Places, 2005
On Communion Ecclesiology

Holiness and Spirituality of the Ordained Ministry, 1976
God's holiness as a gift and a task for the Church and its ministers

Shared Convictions about Education,1970
Rights and responsibilities toward children's education