When it is finally ours, this freedom, this liberty, this beautiful and terrible thing, needful to man as air, usable as earth; when it belongs at last to all, […] this man shall be remembered […] with the lives grown out of his life, the lives fleshing his dream of the beautiful, needful thing."—from “Frederick Douglass” by Robert Hayden

In an interview for the PBS News Hour’s “Where Poetry Lives” series, U.S. poet laureate Natasha Trethewey said that “A commitment to social justice always undergirds my poems.” This could stand as the mission statement for all artists, including African American writers, who have put words to our society’s deepest longings and highest calling.

The literature of the Civil Rights era is part of a continuum that stretches from the Harlem Renaissance to the present day. As the voices of the Harlem Renaissance inspired the music and poetry of the 1960’s, so did the Black Arts movement produce poets recognized today as literary and social giants. Maya Angelou, Sonia Sanchez, Amiri Baraka and Nikki Giovanni all began their careers in the 1960s. What makes them outstanding is the lack of distinction between their art and their moral convictions and social activism. Their lives reflect the struggle for universal justice that informs and guides their work.

Let America be America again. – Langston Hughes. The Harlem Renaissance is a testimony  to art’s transforming power. Often omitted from discussions about this period is its intentionally political focus. The demands for justice in American society required that artists – including writers Lorraine Hansberry, Zora Neale Hurston, Langston Hughes, Paul Laurence Dunbar, Claude McKay and Jessie Fauset Redmon – embrace the responsibility of expressing and promoting the contributions and meaning of black life in the face of undeniable oppression. This sense of commitment became the legacy, the birthright, of the Civil Rights movement.

During the Civil Rights era, artists preserved and claimed their portion of the Harlem Renaissance legacy of cultural responsibility. In their turn, they inspired and fueled the efforts of the millions of citizens whose self-determination and dignity depended on the demolition of systemic injustice that marred national policies, local practices, and personal mindsets. Ossie Davis and Ruby Dee, Paul Robeson, Nina Simone, Odetta, Harry Belafonte and many other performers risked their careers as they offered their fame as a galvanizing tool for the movement.

The literature from this time exemplifies what gives art lasting meaning – that is to say, what generates a legacy – the effect for change it has on individual lives and on society as a whole. What will our generation do to strengthen, preserve and enhance this legacy for future generations? How will the lives of our children “flesh [Frederick Douglass’s] dream of the beautiful, needful thing”?  I have one practical, formidable suggestion: Fight for the restoration of arts education in our schools. 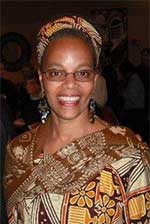 Angela Redmond-Theodore is studying for a Master of Fine Arts degree in creative writing at the University of Tampa. She and her husband, Eric, reside in the Tampa Bay area, where they are members of St. Rita’s parish.