Following the national commemoration of the 50th Anniversary of the March from Selma to Montgomery, what do you think is urgent for African American Catholics and the Catholic Church next?

Archbishop Joseph E. Kurtz, Archbishop of Louisville and President of the United States Conference of Catholic Bishops, released the Statement on the Occasion of the 50th Anniversary of the Civil Rights Act addressing the importance of working against racism. The full text is also available in English and en Espanol.

50 Years Ago in his encyclical to The Clergy And Faithful of the Whole World and To All Men of Good Will, Pope St. John XXIII declared:

“When the relations of human society are expressed in terms of rights and duties, men become conscious of spiritual values, understand the meaning and significance of truth, justice, charity and freedom, and become deeply aware that they belong to this world of values.  Moreover, when moved by such concerns, they are brought to a better knowledge of the true God Who is personal and transcendent, and thus they make the ties that bind them to God the solid foundation and supreme criterion of their lives, both that of life which they live interiorly in the depths of their own souls and of that in which they are united to other men in society.”

A half century ago immersed in a massive social movement, Americans awakened to pleas for justice, civil rights, human rights and the eradication of racism.  At home and abroad those who were “less fortunate” sought relief from unjust systems of oppression, discrimination and colonial status.  In recognition of that critical moment, the USCCB will encourage the Catholic community to rediscover this slice of history through the prism of the Church’s involvement at the time and within the current social context.  From June 2014 through 2015, we will examine how the lessons and legacy of the civil rights era continue to shape us today as Catholics and faithful citizens.  Bookmark this page, share it with your friends and return often for guest commentaries on the USCCB Blog, a calendar of events, prayer and catechetical resources, video clips, practical ideas for engaging the Catholic community and much more. 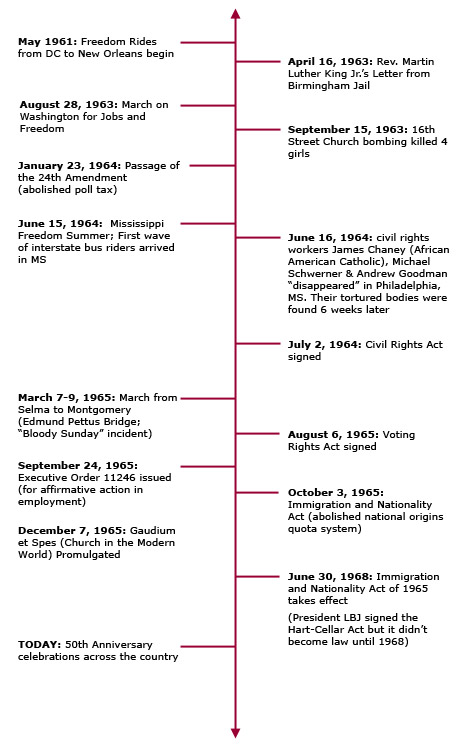