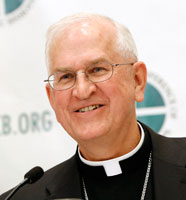 “If anyone says, ‘I love God,’ but hates his brother, he is a liar; for whoever does not love a brother whom he has seen cannot love God whom he has not seen. This is the commandment we have from him: whoever loves God must also love his brother” (1 John 4:20-21).

As America celebrates the 50th anniversary of the Civil Rights Act of 1964 this year, I join together with my brother bishops in recalling the heroic history of that achievement. We honor the many civic, business, and religious leaders, students, laborers, educators and all others of good will who courageously stood up for racial justice against bigotry, violence, ignorance, and fear. We remember with deep gratitude the countless personal sacrifices they made, sacrifices that all too often included hardship, violence, and even death. We honor the victory they won after such a long and sustained civil and legislative struggle.

We are especially grateful for the vital contributions of the faith community during this period. Propelled by their values and beliefs, members of different faiths and denominations, including Catholics, insisted that racial justice in the United States was an imperative, no longer to be ignored. Inspired by Holy Scripture, fortified by prayer and spiritual music, and sustained by a love for Christ, a number of Christians worked with and for the poor and marginalized, notably in the segregated South.

We also join our voice to those Catholic bishops who repeatedly spoke against racism...
...clearly signaling by their words and actions that racial discrimination has no place in the Church or in society.

We also join our voice to those Catholic bishops who repeatedly spoke against racism as evidenced by statements from the USCCB’s predecessor organization in 1943, 1958 and again in 1963. In the 1963 statement On Racial Harmony, the bishops condemned the injustices of segregation saying that it “implies that people of one race are not fit to associate with another…We cannot reconcile such a judgment with the Christian view of man’s nature and rights.” They further insisted that “discrimination based on the accidental fact of race or color…cannot be reconciled with the truth that God has created all men with equal rights and equal dignity.” A number of bishops—including Archbishop Ritter (St. Louis, 1946), Archbishop O’Boyle (Washington, D.C., 1940s and 50s), Archbishop Rummel (New Orleans, 1950s and 60s), and Cardinal Sheehan (Baltimore, 1963)—worked to desegregate Catholic schools, hospitals, and other institutions, clearly signaling by their words and actions that racial discrimination has no place in the Church or in society.

In a later pastoral statement, the bishops even more directly named racism for what it is: “Racism is a sin: a sin that divides the human family, blots out the image of God among specific members of that family, and violates the fundamental human dignity of those called to be children of the same Father.” (Brothers and Sisters to Us: U.S. Catholic Bishops’ Pastoral Letter on Racism, 1979) The Church remains a prophetic voice and must continue to insist on the dignity of all persons and the very real opportunity available to each of us, to have a personal encounter with Christ and to be instruments of His healing, love, and truth. As my brother bishop, Bishop Joseph Perry has said, “The Church remains the principal source of healing and hope for people... We continue to need from the Church prophets and agents of reconciliation, individuals and groups, laity and clergy who make it their responsibility to bring people together despite stubborn differences and the conflicts that would guarantee walls of separation in our society.” (1998)

Fifty years ago, the Civil Rights Act offered an olive branch of hope for equal treatment and opportunities for education, employment, and fuller participation in society. The legislation promised a better quality of life for millions of Americans who had been excluded from the privileges of citizenship based on race, color, national origin, and other grounds. It championed human dignity and provided legal protections that began to transform communities around the country.

The Civil Rights Act was a monumental step forward and since then, we have made even more progress in this vital work of transforming hearts and minds, but there is still much work to do. The Act itself did not eradicate the legacy of slavery, racial discrimination and injustice. In fact, there are reminders across our nation today that the embers of racial discrimination still smolder. This evil infects institutions, laws, and systems, and it harms our brothers and sisters. We must therefore continue to work against the destructive influence of racism on families, religious and civil communities, employment, the prison system, housing, hunger, educational achievement, and mental health.

We must therefore continue to work against the destructive influence of racism on families, religious and civil communities, employment, the prison system, housing, hunger, educational achievement, and mental health.

While reflecting on the work that has been accomplished and that which remains to be done, I wish to mention the special and untiring contributions of Rev. Dr. Martin Luther King, Jr. Last Spring, I had the privilege to join a delegation of Christian leaders at an ecumenical symposium in Alabama where we reflected on Dr. King’s renowned Letter from Birmingham Jail in the presence of his daughter, the Rev. Bernice King. In his letter, Dr. King advocated for strong, timely action to lift us “from the quicksand of racial injustice to the solid rock of human dignity.” I hope we will all continue to strive for that “solid rock of human dignity” today and to honor with gratitude the sacrificial labors of Dr. King’s writings and actions.

In conclusion, the Gospel requires ongoing personal and social transformation. Respecting the dignity of each person is paramount as we seek to spread the beauty of God’s truth throughout our world. We cannot give in to discouragement. As Pope Francis reminds us, “Bringing the Gospel is bringing God’s power to pluck up and break down evil and violence, to destroy and overthrow the barriers of selfishness, intolerance and hatred, so as to build a new world.”

As we commemorate the notable achievements that resulted in the Civil Rights Act and other significant movements toward justice for all God’s children, let us continue to take up the banner and press forward to love one another as our Lord loved us (Jn 13:34). And, as we do so, we recall the words of Dr. King written from his jail cell, “Let us all hope that the dark clouds of racial prejudice will soon pass away and the deep fog of misunderstanding will be lifted from our fear drenched communities, and in some not too distant tomorrow the radiant stars of love and brotherhood will shine over our great nation with all their scintillating beauty.”