There Are No Minority Americans

There Are No Minority Americans

By The Most Reverend Edward K. Braxton, Ph.D., STD

On September, 22, 1862 President Abraham Lincoln declared, "That on the first day of January, in the year of our Lord one thousand eight hundred and sixty-three, all persons held as slaves within any State or designated part of a State, the people whereof shall then be in rebellion against the United States, shall be then, thenceforward, and forever free; and the Executive Government of the United States, including the military and naval authority thereof, will recognize and maintain the freedom of such persons, and will do no act or acts to repress such persons, or any of them, in any efforts they may make for their actual freedom.”

During the subsequent one hundred and fifty years, People of Color have struggled in the midst of the worst forms of oppression and racism to realize the dream of being “thenceforward, and forever free.” Sadly, the United States government and religious groups have done “acts to repress such persons” in efforts they have made “for their actual freedom.” One of the almost unconscious ways in which this has happened has been in the way words have been used. From the time of the Jim Crow Laws, to the Civil Rights Movement, to the present day, insulting, demeaning, and dehumanizing words have been used to diminish the dignity of Americans of African decent as a group and as individuals. The most offensive of these expressions, which need not be mentioned here, have had the common consequence (and goal?) of making people feel inferior, lacking in worth and value. One of the most subtle present day examples of this is the expression “minority group,” which causes some members of the community to think of themselves in terms of who they are not, rather than in terms of who they are. 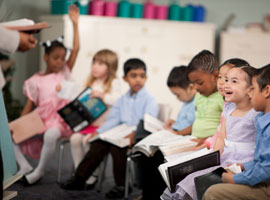 Fifty years since historic Civil Rights Legislation there should be no “Minority” Americans. Are there really “minority” Americans and “minority” Catholics? I have never used this term in reference or to any group of American citizens or American Catholics. I believe it is erroneous and counter-productive. If we think carefully about what it means to be an American and to be a Catholic, we can see why these are questionable expressions.

Beginning in the 1960s, the media, the federal government, and Americans of certain racial and ethnic backgrounds (especially Hispanic, Asian and People of Color) began to speak more and more of “minorities” and “minority groups” in solidarity with women and other groups who have experienced injustice based upon discrimination. These designations were used to help formulate the

argument that in order to redress the grave injustices caused by systemic prejudices, special consideration should be given to members of these groups in matters related to education, employment, housing, financial assistance, professional advancement, and business contracts. Few fair-minded people will argue that longstanding practices of discrimination have made it impossible for certain groups of Americans to have equal access to the American dream.

Without prejudice to the validity of these important concerns, I believe that the common use of the word “minorities” as the collective designation of these groups of people perpetuates negative stereotypes and is contradicted by what it means to be an American citizen.

It does not take a particularly critical analysis to recognize the fact that words like “minorities” and “minority groups” are used selectively and are not applied consistently in reference to all ethnic groups that make up a statistically small number of the U.S. citizens. At times, these expressions seem to be used as code words with subtle negative connotations. They also beg the question: Which American citizens are the “majority” group? There are no “ethnic” Americans in the same sense that one might speak of “ethnic” Japanese in Japan, for example. There is no single ethnic, racial, or cultural group that constitutes “true” Americans.  Every citizen of the U. S. is fully and equally an American in the exact same sense of the word. Citizens, who are descendants of passengers on the Mayflower, are not, somehow, more truly American than descendants of “passengers” of slave ships, native people of the Seminole nation, or the most recent immigrants from Pakistan. If they are citizens, they are Americans, precisely because there are no ethnic Americans. A careful reflection on the meaning of the expression, “E Pluribus Unum” excludes the possibility of designating “minorities” in this country, unless all citizens are so designated.

"Which American citizens are the 'majority' group?  There are no 'ethnic' Americans..."

Obviously, this truth has not been fully accepted by all sectors of American society (including the Catholic Church) in the past or the present. European-Americans, with roots in Ireland, Germany, Italy or Poland, for example, were once ostracized in this country as “immigrants,” “foreigners,” and “undesirable minorities.” The same was true of Jewish people. But why are they generally not considered minorities today? The answer is not because any one of these groups now constitutes the statistical majority of the U.S. population. As Matthew Frye Jacobson’s Whiteness of a Different Color: European Immigrants and the Alchemy of Race notes, the process of gathering together those Americans whose ancestors were from various European countries with very little in common and making them the “majority” group and relegating everyone else as “minorities” is, historically, a rather recent and arbitrary development.

"A careful reflection on the meaning of the expression, “E Pluribus Unum” excludes the possibility of designating “minorities” in this country, unless all citizens are so designated."

It is a development which, at certain junctures, excluded even European-Americans of certain backgrounds as despicable ethnic minorities. In its present usage, the term “minority groups” often connotes the haves vs. the have-nots, the powerful vs. the powerless, the assimilated vs. the non-assimilated, because they have not assimilated middle-class mores and the cultural heritage of Western Europe. As a result, even when the majority of the residents in a city are African-American or Hispanic-American, they are still “minorities.”

It is obvious that the federal government, the media, the justice system, educational institutions, and the Catholic Church in the United States cannot be effective in their work without being aware of the complex ethnic, racial, and cultural diversity that makes up the population of this country. However, an awareness of this diversity must never lead these institutions to the uncritical acceptance or even unwitting perpetuation of terms like “minorities” and “minority groups” which are rarely neutral and which may contradict what it means to be an American by inviting stereotypes and reinforce prejudices. As a Catholic Bishop, I am very aware of the fact that many Protestant Christians today rightly prefer Catholic Christians to refer to them as what they are, “Christians of other traditions,” rather than as what they are not, “non-Catholics.” No one ever calls a Catholic a “non-Presbyterian.” 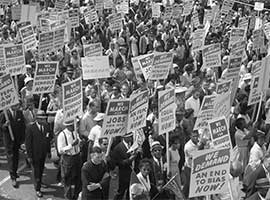 In this new century, it might be most helpful if we could recall that all Americans are from different racial and ethnic backgrounds and that no group constitutes the majority. Indeed, many serious anthropological studies suggest that, in spite of their sociological prominence, ethnicity and race are very problematic categories. Frequent references to groups of Americans and groups of Catholics as “minorities” seem to designate them as who they supposedly are not. They are not a part of an arbitrary grouping of Americans of certain ethnic groups (those of European ancestry) who are designated as “the majority.” Significantly, the majority of the world’s population is not of European origin, and current demographic trends indicate that in the decades ahead Americans of European heritage may become a “minority” of the overall population.

The Catholic Church, faithful to Scripture, teaches that in Christ there is neither Greek nor Jew, slave nor free, male nor female; neither north nor south, east nor west. All are redeemed sinners transformed by Christ as members of His “mystical Body” with equal dignity before God. It might be a good thing if the Catholic Church, other religious groups, and the media would lead the way in eliminating or at least challenging expressions like “minorities” and “minority groups.” This is more than a matter of “political correctness.” Words, as conveyers of meaning, have great power for good or evil. It is asking too much for a nation that proclaims itself to be “one from many” to affirm that in truth there are no majority/minority groups in this country because we really are one. We are simply Americans, proud of our amazingly diverse backgrounds, with every right to expect, even demand, to be treated with equal dignity in our churches, before the law and the constitution, and in the public square. 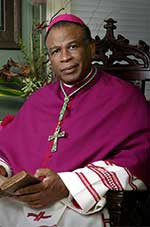 The Most Reverend Edward K. Braxton, Ph.D., STD (Louvain) began as a priest of the Archdiocese of Chicago. He has served on the faculty of theology at the Catholic University of America, the University of Notre Dame, the Pontifical North American College, and Harvard Divinity School. A well-known theologian, he is the author of several theological books and many articles on a wide range of theological topics. He has served as auxiliary bishop of St. Louis, MO and as bishop of Lake Charles, LA. He has been bishop of Belleville, IL since June 2005. He is currently a member of the United States Conference of Catholic Bishops and serves on the Administrative Committee, the Committee on Divine Worship, the Committee for the Protection of Children, and the Committee on Priorities and Plans.