As I reflect on the realities of institutional racism, sexism and economic inequality on this fiftieth anniversary year of the Civil Rights Act of 1964, I wonder about the role the Catholic Church will play in America’s moral future.

The U.S. bishops have collectively condemned racism since 1958, and Pope John Paul II formally apologized to African leaders in 1985 for the Church’s participation in the transatlantic slave trade. Yet, few religious orders have publicly apologized for their slaveholding pasts and/or the decades-long exclusion of African Americans from their membership ranks. Moreover, many church histories fail to document the racist abuses and humiliations long suffered by the nation’s black Catholics, religious and lay, at the hands of their fellow Catholics. As a result, the miracle of the African-American Catholic community has often been taken for granted or simply overlooked.

I have spent the last eight years researching the history of black female religious life in the United States, and I have uncovered past and present stories of discrimination and racist abuse in the Church that have shaken me to my very core. Despite such challenges, I remain in the Church of my birth because of the extraordinary faith of the longstanding African-American Catholic community. Through archival and oral history research, I have uncovered countless testimonies of black Catholic men, women and children who understood that racism had no place in their Church and took the words of prominent lay leader Daniel Rudd to heart when he defiantly urged black Catholics to help their Church break the color line in 1891.

Black Catholic families, like that of John A. and  Mary Susan (neé Miller) Lee, Sr., of Philadelphia, kept the faith in the face of strident white racism and broke several racial barriers in the process. Born in Washington, in 1885, John Sr. was the descendant of a Catholic slave owned by the Jesuits at Georgetown University and a prominent lay leader in the Philadelphia archdiocese during the first half of the twentieth century. In 1955, he became the first black person to be awarded the Vercelli Medal of the Holy Name Society.

The Lees also had twelve children, two of whom became women religious.Barred from entering every female congregation in the Philadelphia archdiocese solely on the basis of race in the late 1940s, Susan Grace and Bertha Amelia Theresa Lee 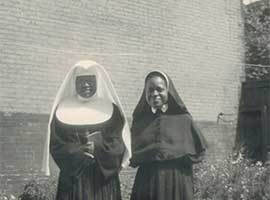 entered the Oblate Sisters of Providence, the nation’s first successful black Catholic sisterhood, in 1947 and 1949 respectively and remained in the community until their deaths. 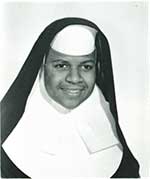 became Philadelphia’s first black Religious Sister of Mercy. In 1968, she  served as a founding member of the National Black Sisters’ Conference, which was organized to protest racism in the Church and preserve black Catholic education. In 1990, Sister Cora became the first black nun to lead a U.S. parish after being appointed to serve as the pastoral administrator at St. Elizabeth’s Catholic Church in Richmond, Virginia.

Such testimonies of faith and resilience in the face of unholy discrimination and unspeakable suffering are all-too-common in black Catholic history. Thousands of contemporary African-American Catholics can trace their lineage back to the enslaved men, women and children once “owned” by the Church, and their history (and the Church’s long history of racism) must never be forgotten. Indeed, if the U.S. Church seeks to remedy the ills of its own participation in over 400 years of chattel slavery and segregation, it must start by always telling an honest history of American Catholicism—one that includes rampant racism and exclusion, but also the insurmountable faith, hope, love and charity of people who fought (and continue to fight) to make the Church truly Catholic. 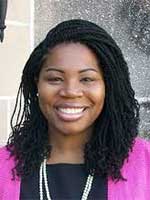 Dr. Shannen Dee Williams is an assistant professor of history at the University of Tennessee at Knoxville. She is currently writing a book entitled, “Subversive Habits: Black Nuns and the Struggle to Desegregate Catholic America after World War I,” which examines the hidden history of black nuns in the fight to dismantle racial and gender barriers in the U.S. Church. When completed, it will be just the first historical monograph on black Catholic sisters in the twentieth-century United States. Dr. Williams also lectures on the long and rich history of black Catholic nuns in the Atlantic world and advocates for the revitalization of black female religious life in the United States. Her writings have appeared in Religion Dispatches, The Feminist Wire, the U.S. Catholic Blog, and Patheos.