March 14, 2020 - Diocese of Richmond's Asian Retreat will be held at the Lewis Ginter Botanical Garden in Richmond, VA. The theme of the retreat is Encountering Christ in Harmony with Creation and Ecology.

May 2, 2020 - The 18th Annual Asian and Pacific Island Catholics Marian Pilgrimage will be held at the Basilica of the National Shrine of the Immaculate Conception in Washington, DC. This annual event brings together many Asian and Pacific Islander Catholic communities to celebrate their heritage and Marian devotions. Most Rev. William E. Lori, Archbishop of Baltimore, will be the main celebrant.

June 9, 2020 - Subcommittee on Asian and Pacific Island Affairs meeting will be held in Detroit, MI.

July 2-5, 2020 - The Vietnamese Eucharistic Youth Movement’s (VEYM-USA) 7th Coming to the Promised Land National Convention will be held at Glorieta Adventure Camps in Santa Fe, NM. The theme of the event is “Though many, are one body” (1 Cor. 12:12).

July 23-26, 2020 - Journeying Together National Intercultural Encounter for Ministries with Youth and Young Adults will be held at John Carroll University in Cleveland, OH. 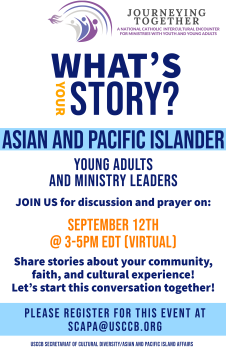 October 27-30, 2020 - The 4th National Association of Filipino Priests in the USA (NAFP-USA) General Assembly will be held at the Hilton Meadowlands hotel in East Rutherford, NJ.

October 30-November 1, 2020 - The U.S. Catholic Mission Association's (USCMA) National Conference will be held in El Paso, TX. The theme of the conference is Angels Unawarission with People on the Move.

November 15, 2020 - Subcommittee on Asian and Pacific Island Affairs meeting will be held in Baltimore, MD.

December 2020 - Many archdioceses and dioceses celebrate Simbang Gabiilipino tradition of Novena Masses (nine consecutive days) celebrated in parishes across the country leading up to Christmas. It is "a privileged votive mass, i.e.ass that does not correspond to the liturgical calendar but hapecial intention" said Philippines Church historian Fr. Rex Andrew Alarcon. Watch the Archdiocese of Washington's video explaining what Simbang Gabi is and check back foist of Simbang Gabi celebrations from various arch/dioceses.

Ongoing - Shalom World hostumber of events periodically across the country. Check the website for dates and locations.

New podcast on evangelization and catechesis

Do you enjoy sharing your Catholic faith with others? Is God inviting you to serve in parish ministries of evangelization and faith formation? Join in an informative conversation by listening to a new podcast series exploring key themes in evangelization and catechesis today. Hosted by Dr. Jem Sullivan from the School of Theology and Religious Studies at The Catholic University of America, Washington, DC., the podcast features prominent guests such as Bishop Robert Barron, among others. Listen and be inspired in your faith and ministry as a missionary disciple to be an effective evangelist and catechist in your faith community. To listen and view the podcast find the speakers here - https://trs.catholic.edu/social-media/podcast.html

Ordination of Asian and Pacific Island Priests in the U.S.

February 22, 2020 - The Concert at the Arena was sponsored by Oregon Catholic Press (OCP) at LA Religious Education Congress at the Anaheim Convention Center in Anaheim, CA.

January 30-February 1, 2020 - The Mid-Atlantic Congress (MAC) was held at the Hilton Baltimore hotel in Baltimore, MD.

January 25-28, 2020 - The Catholic Social Ministry Gathering (CSMG) was held at the Omni Shoreham Hotel in Washington, DC. The theme of event was Bearing Witness: Life and Justice for All. In conjunction with the CSMG, the Diversity Outreach Initiative (DOI) took place. The DOI seeks to develop leaders from diverse Catholic communities for ministry in the Church.

December 6-7, 2019 - The Encountering Christ in Harmony focus workshop was held at the California Catholic Ministry Conference in San Jose, CA.
November 16, 2019 - The Diocese of Richmond's Culture and Faith Celebrating Asian Catholics: One World Encounter was held at Church of the Resurrection in Portsmouth, VA.

November 10, 2019 - The Subcommittee on Asian and Pacific Island Affairs meeting was held in Baltimore, MD.

November 9, 2019 – The Filipino Council of the Archdiocese of Baltimore’s Faith & Leadership Assembly for Renewal and Empowerment (FLARE) event was held at St. Piuhurch in Baltimore, MD.

November 2-10, 2019 - The 27th International Week of Fasting and Praying was held at the Basilica of the National Shrine of the Immaculate Conception in Washington, DC. Guest speakers included Fr. Ubald Rugirangoga, and Fr. Chris M. Alar, MIC.

October 20-28, 2019 - The Annual Solemn Novena in Honor of St. Jude Thaddeus was held at Shrine of St. Jude Catholic Church in Rockville, MD.

October 20, 2019 - The Archdiocese of San Francisco's 9th Annual Filipino Ministry Gala was held at the Cathedral of St. Mary of the Assumption in San Francisco, CA. The gala was belebration of Filipino culture and heritage.

October 14-17, 2019 - The Vietnamese Priest Convocation The Journey of Emmaus VIII was held at the Vietnamese Catholic Center in Santa Ana, CA and at the Christ Cathedral in Orange, CA witheme “Let Mutual Love Continue” (Hebrews 13:1).

October 6, 2019 - The Archdiocese of Milwaukee's Asian Pacific Unity Day celebration was held at the Mary Mother of the Church Pastoral Center in Milwaukee, WI. Most Rev. Jerome E. Listecki was the main celebrant anight reception followed the Mass.

September 22, 2019 - The Filipino Council of the Archdiocese of Baltimore's 9th Archdiocesan Filipino Saints Fiesta Celebration honoring San Lorenzo Ruiz and San Pedro Calungsod was held at Cathedral of Mary Our Queen in Baltimore, MD. Most Rev. William E. Lori was the main celebrant. The Triduum was held on September 17-19, 2019 prior to the fiesta.

September 21, 2019 - The Archdiocese of Washington's Feast of St. Lorenzo Ruiz de Manila celebration was held at the Shrine of St. Jude in Rockville, MD. Most Rev. Mario E. Dorsonville was the main celebrantotluck reception followed the rosary and Mass.

September 21, 2019 - The Korean American Day of Prayer Vocations Conference was held at St. Paul Chung Korean Catholic Church in Fairfax, VA. The theme of the event was “Come And See” (John 1:39).

September 14, 2019 - The 2019 Marian Rosary Congress & Pilgrimage was held at the Basilica of the National Shrine of the Immaculate Conception in Washington, DC. His Excellency Most Rev. Bernardito C. Auza, Permanent Observer of the Holy See to the United Nations and the Organization of American States, was the celebrant and homilist.

September 7, 2019 - The Indian American Catholic Association's (IACA) 22nd Annual Pilgrimage to Our Lady of Good Health was held at the Basilica of the National Shrine of the Immaculate Conception in Washington, DC.
August 31-September 1, 2019 - The National Conference of Burmese-American Catholics (NCBAC) 10th Annual Gathering was held at Trinity High School in Camp Hill, PA.
August 11, 2019 - Annual observation of National Minorities Day in Pakistan which acknowledges the contributions of minority communities.

August 4, 2019 - The Archdiocese of Chicago's Asian Community Mass was held at St. Margaret Mary Church in Chicago, IL.
July 6, 2019 - Mass in celebration of Most Rev. Ignatius Wang’s 60th Anniversary of Ordination to the Priesthood was held at St. Mary's Cathedral in San Francisco, CA. The Mass was livestreamed.

June 29, 2019 - The 22nd Annual National Filipino Pilgrimage in Honor of Our Lady of Peace and Good Voyage was held at the Basilica of the National Shrine of the Immaculate Conception in Washington, DC. Most Reverend William E. Lori, Archbishop of Baltimore, was the main celebrant and there waeflection by Sr. Mary Regina T. Kuizon, RGS.

June 26-30, 2019 - The National Conference of Burmese-American Catholics (NCBAC) Youth Camp was held at St. Felix Catholic Center in Huntington, IN.

June 21, 2019 - The Diocese of Arlington's Annual Mass for Multicultural Communities was held at St. James Catholic Church in Falls Church, VA. The main celebrant was Most Rev. Michael Burbidge.

June 10, 2019 - The Subcommittee on Asian and Pacific Island Affairs meeting was held in Baltimore, MD.

May 31-June 1, 2019 - The Diocese of San Bernardino's seminar titled Encountering Christ in Harmoneing Disciples in Mission was held at Diocesan Pastoral Center in San Bernardino, CA.

May 25-27, 2019 - The Keluarga Katolik Indonesia-Houston's retreat was held at Camp Allen in Navasota, TX. The theme of the retreat was Come to me, all you who labor and are burdened, anill give you rest. (Matthew 11:28).

May 4, 2019 - The 17th Annual Asian and Pacific Island Catholics Marian Pilgrimage was held at the Basilica of the National Shrine of the Immaculate Conception in Washington, DC. This annual event brought together many Asian and Pacific Islander Catholic communities to celebrate their heritage and Marian devotions. His Excellency Archbishop Christophe Pierre, Apostolic Nuncio to the United States, was the main celebrant and homilist.

March 24, 2019 - The Archdiocese of Seattle's Asian and Pacific American Catholics Gathering was held at St. Thomas Catholic Church in Tukwila, WA. The theme of the event was Encountering Christ in Harmony: Discpiles in Mission.