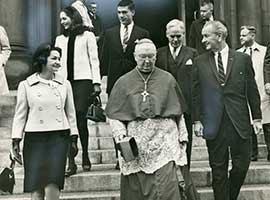 If our ancestors could speak to us, certainly they would reveal how prayer sustained them, how “God made a way out of no way.”  They would testify that God was their constant companion.  How else could they have survived the dark days of slavery, segregation, mob violence, unexplained disappearances, peonage, police brutality, degradation and humiliation so that the seed of their loins and the fruit of their womb could be born?

If our Catholic ancestors could converse with us, they would let us know how the prayers of the Church spoke to their hearts through the Mass, the Lord’s Prayer, the Rosary, the Stations of the Cross and other forms of spiritual incense.  As we reflect on where we have come and how we have made it through the Modern Civil Rights era to the present; as we ponder how our people will survive the challenges of this day, let us continue the tradition of walking intimately with our God, the Blessed Mother and the saints in heaven.

The Catechism of the Catholic Church says of prayer (CCC#2745):

“Prayer and the Christian life are inseparable, for they concern the same love and the same renunciation, proceeding from love; the same filial and loving
conformity with the Father’s plan of love; the same transforming union in the Holy Spirit who conforms us more and more to Christ Jesus; the same love for
all men, the love with which Jesus has loved us. ‘Whatever you ask the Father in my name, he [will] give it to you. This I command you, to love one another.’

He ‘prays without ceasing’ who unites prayer to works and good works to prayer.  Only in this way can we consider as realizable the principle of praying without ceasing.”

This Stations of the Cross emphasizing social justice invites us to meditate on the Lord’s passion with particular concern for those suffering today.

Catholic Social Teaching Rights and Responsibilities  -  Learn more about the Catholic tradition which teaches that human rights must be protected and responsibilities must be met to protect human dignity and achieve a healthy community.

Life and Dignity of the Human Person - Information on the Catholic teaching that the dignity of the human person is the foundation of a moral vision for society.

Love Thy Neighbor as Thyself - This is a re-release of several articles from bishops articulating the perspectives of different cultural groups, addressing racism as a whole and providing suggestions to combat racism.

What We Have Seen and Heard - This historic document was written in 1984 by ten black bishops as a witness to the black community.