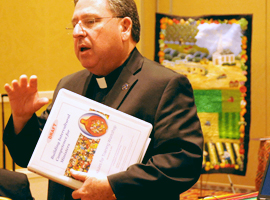 This module places the entire course within the framework of the Church’s identity and mission to evangelize and the New Evangelization. Pope John Paul II first used the term “New Evangelization” in his encyclical Redemptoris Missio. It is to be understood as presenting anew or, as Pope Benedict XVI has put it, “re-proposing” the faith of Jesus Christ, especially in places where adherence to the Gospel has already taken root but is now in decline, so that believers may grow more deeply in discipleship. Pope John Paul II added his own insight about the process of evangelization and spoke of the New Evangelization as proclaiming the Gospel with new methods, expressions, and ardor.

The task begins by examining the New Evangelization as it might apply to the United States—especially to its prevailing culture—and then focuses on the essential need to develop greater capacity for intercultural communication. In so doing, we may see new challenges and opportunities for presenting the message of Jesus Christ. The module refers to the Catholic bishops of the United States’ document Go and Make Disciples as expressing their vision of evangelization in providing the framework for the Church’s identity and mission in the United States.

The purpose of the Church is to evangelize: “The Church has received from the apostles Christ’s solemn command to proclaim the truth which saves, and it must carry it to the very ends of the earth” (Lumen Gentium, no. 17). To evangelize means literally to “spread the Good News.” At the heart of that message is the encounter with Jesus Christ and the salvation he brings to the world. From that encounter comes incorporation into the Body of Christ, which is the Church. The Church’s very nature is missionary—that is, to share this message with the entire world. Thus, missionary activity is not something left solely to the professional foreign missionary; it is a responsibility incumbent on all believers.

In his 1975 apostolic exhortation Evangelii Nuntiandi, Pope Paul VI elaborated profoundly on the meaning of evangelization. It is not directed only to the salvation of individual souls, but to entire societies and cultures. In his understanding of the “evangelization of cultures,” those values and patterns of living that shape individual lives and societies are brought into encounter with Christ so that all may have life in abundance (see Jn 10:10). Evangelization can be understood as having four pillars:

2.  The evangelization of cultures: the encounter between a people’s rituals, symbols, and myths (narratives) and the Gospel, leading to the transformation of culture (inculturation)

3.  Liberation: the transformation of social, economic, and political orders in light of gospel values of life and human dignity

4.  Ecumenical and interreligious dialogue: work to bring about the unity of all peoples in pursuit of Jesus’ mandate

In Redemptoris Missio, Pope John Paul II focused on re-igniting the fire of faith in the baptized so that they might be evangelizers of those around them. He urged the faithful to seek out the new areopagoi—that is, the new social forums in which the faith is to be presented. Indeed, the call to a New Evangelization became a cornerstone of John Paul II’s papacy.

Pope Benedict XVI has continued the call for a New Evangelization. His homily to the Catholic bishops of the United States in April 2008 in Washington, D.C., underscored the importance of the New Evangelization for America. In July 2010, he established a Pontifical Council for the New Evangelization. He has reminded the faithful of the function of the Court of the Gentiles, which brought non-Jews into dialogue with people from all cultures in the precincts of the Temple in Jerusalem.

In Go and Make Disciples, the Catholic bishops of the United States stress outreach in dialogue based on a clear sense of Catholic identity. They outline three goals in this document: (1) to deepen the faith of Catholics so that they might share their faith with others, (2) to invite all in the United States to hear the message of salvation, and (3) to foster gospel values in society.

What Are the Challenges of the New Evangelization in the United States?

The ongoing Pew Forum on Religion and Public Life (www.pewforum.org) and reports from the Center for Applied Research in the Apostolate (CARA) at Georgetown University (cara.georgetown.edu) provide rich background material for understanding the religious and demographic context as well as the challenges facing the Catholic Church in the United States. Much of what follows here is culled from these sources.

The United States is the fifth most multicultural country in the world (after Australia, Switzerland, Canada, and Sweden, though these countries have much smaller populations) (see Organization for Economic Cooperation and Development, International Migration Outlook Annual Report, 2006 Edition [OECD Publishing, 2006]). It has also been a land of immigration. The presence of so many cultures has given the nation a pluralist quality.

Although Catholics make up the single largest religious body in the United States (some 24 percent of the population), the prevailing culture has a Protestant flavor. Indeed, anti-Catholicism has marked much of U.S. history.

The United States is a secularized society, as are most financially well-off countries around the world today. However, it is not as secularized as many countries in Europe or as Canada, Australia, and New Zealand. Fifty-eight percent of Americans say they pray at least once a day (see religions.pewforum.org/comparisons). Nevertheless, the number of Americans who claim to have no religious belief at all continues to rise(see Barry A. Kosmin and Ariela Keysar, American Religious Identification Survey [ARIS 2008] Summary Report [Hartford, CT: Institute for the Study of Secularism in Society and Culture, 2009], and Keyser, Egon Mayer, and Kosmin, “No Religion: A Profile of America’s Unchurched,” Public Perspective 14[1]: 28-32).

Although the Catholic Church has continued to grow in numbers (something not experienced by the so-called “mainline” Protestant churches), this growth has been largely because of immigration and immigrants’ larger families (see Robert D. Putnam and David E. Campbell, American Grace [New York: Simon and Schuster, 2010] 138). Many Catholics drift away from the Church, especially as young adults. It has been said that if all the former Catholics in the United States were to constitute a church denomination, it would perhaps be the second largest church in the country, after the Catholic Church itself (for reflections on the findings of the 2007 Pew Forum on Religion and Public Life regarding the large number of lapsed Catholics, see Joseph A. Sirba, “U.S. Catholics Leaving the Church in Droves: What Can Be Done?” at www.ad2000.com.au/articles/2009/may2009p8_3032.html and Tom Roberts, “The ‘Had It’ Catholics” in National Catholic Reporter, October 11, 2010, ncronline.org/news/faith-parish/had-it-catholics).

Individualism has long been a characteristic of the prevailing culture in the United States. Connected with that individualism is a strong sense of freedom to choose one’s lifestyle and profession. Individualism can make space for creativity and achievement, but it can also be a source of selfishness.

Because of its wealth, U.S. society can be a materialistic one, meaning that having more and more possessions becomes the criterion for self-fulfillment and success. Recent studies have indicated that while the United States is one of the richest countries in the world, it ranks only about fourteenth in terms of happiness (see www.nationmaster.com/graph/lif_hap_lev_qui_hap-lifestyle-happiness-level-quite-happy).

Where do Catholics find themselves regarding secularism, individualism, and materialism? Secularism traditionally carries with it important values such as respect for human rights and freedom of religion. When the secular crowds out the religious, however, it needs to be challenged. Religion provides important pathways to the transcendent that every society needs.

Respect for the dignity of every human person is a central tenet of Christian faith. In Catholic social teaching, the basic social unit is not the individual, but the family. Catholic faith sees every human being as interdependent with a community, not as solitary individuals.

Material goods are necessary for human survival and well-being, but when material goods become idols—taking away our relation to God and putting something else in its place—the quest for material goods needs to be critiqued.

The New Evangelization in a Society and Church of Many Cultures

So what does the New Evangelization look like in light of a culturally pluralistic society and Church? Here are some thoughts for reflection:

A Theology for Intercultural Ministry

A theology for intercultural ministry finds its sources in the Christian understanding of the human person and in a theology of the Church as communion, as truly “catholic” (or universal), and as missionary in nature.

Christian Anthropology: The Understanding of the Human Person

Christianity bases its understanding of the human person on the first Creation story in Genesis. There we read that human beings are made in the “image” and “likeness” of God (Gn 1:26-27). The dignity of human beings is rooted in their creation in this image and likeness of God, and “it shines forth in the communion of persons, in the likeness of the unity of the divine persons among themselves” (CCC, no. 1702). It is in this light that Christians understand that every person, regardless of race or ethnicity, is to be treated with dignity and respect.

The Church as Communion

The Church is a communion modeled on the love among Father, Son, and Holy Spirit. It seeks to mirror that communion of Divine Persons in the way it welcomes and gathers in all peoples—“every tribe and tongue, people and nation” (Rev 5:9). As Pope John Paul II put it in Novo Millennio Iineunte, the Church is to be the “home and school of communion” (no. 43). The Church is not sectarian and meant only for a chosen few.

The Church as Catholic

Moreover, our Church is a catholic Church; in its universality, it intends to gather in all peoples without exception. It is a communion in diversity, not in uniformity. It is Catholic, too, in its believing all that the Lord has revealed. It is within this frame of mind that the Church undertakes ministry among all cultures for the sake of bringing all people together into communion with one Lord and one common Father.

The Church as Mission

From Vatican II to Evangelii Nuntiandi and Redemptoris Missio,recent Church teaching has stressed the missionary identity of the Church. Both Pope John Paul II and Pope Benedict XVI have referred to the Church as being missionary in its entirety. By virtue of Baptism, all are called to be missionary disciples of the Lord Jesus Christ. The Fifth Conference of the Bishops of Latin America and the Caribbean extensively developed the theme of missionary discipleship in the 2007 Concluding Document of Aparecida. One of the implications of the Church’s missionary character is precisely the central role of intercultural knowledge, skills, and attitudes that enable ministers of the Gospel to proclaim Christ’s message effectively among all nations.