Working together, Catholics and Buddhists can promote the "change of heart, visions and practices" that are necessary for safeguarding creation, Pope Francis said. 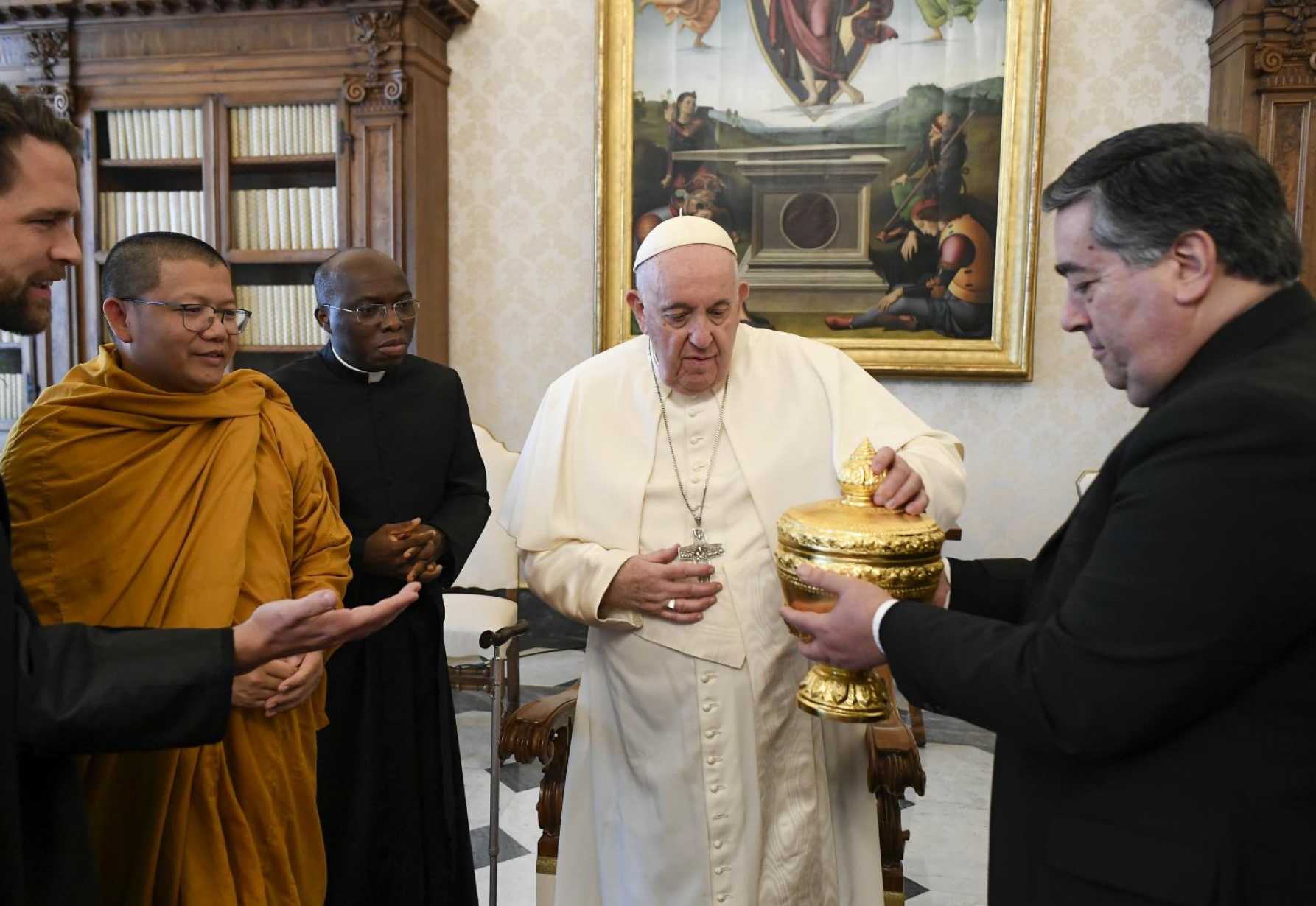 Pope Francis receives a gift from members of a delegation of Buddhists from Cambodia in the library of the Apostolic Palace at the Vatican Jan. 19, 2023. (CNS photo/Vatican Media)

VATICAN CITY (CNS) -- Interreligious dialogue can combat climate change by tapping into the "profound richness" of faith traditions to promote a sense of "ecological responsibility" and conversion, Pope Francis said.

Welcoming a delegation of Cambodian Buddhists to the Vatican Jan. 19, the pope called for "dialogue at all levels" to seek solutions for repairing the broken relationship between humanity and nature. "This, however, cannot take place without a change of heart, visions and practices," he noted.

The Buddhist delegation traveled to the Vatican to meet with officials from the Dicastery for Promoting Interreligious Dialogue. They chose the theme "Ecological Conversion" for their gathering in Rome.

Referencing his 2015 encyclical "Laudato Si', on Care for Our Common Home," Pope Francis said ecological conversion entails turning "what is happening to the world into our own personal suffering," which results in a sense of personal responsibility toward the planet.

"Ecological conversion happens when the human roots of the present environmental crisis are named," the pope told the delegation, and "when true repentance leads to the slowing or halting of trends, ideologies and practices that are hurtful and disrespectful to the earth."

To create a culture of care for the Earth, Pope Francis said, individuals also must commit themselves to healing societal wounds "inflicted by greed, excessive search for financial profits, lack of solidarity with neighbors and disrespect for the environment."

He cited the Buddhist practice of "metta," which involves not harming living things, and living a simple lifestyle as examples of how Buddhists "can achieve a compassionate protection for all beings" and related them to the Christian calling to be faithful stewards of God's creation.

Ecological considerations must be taken even when addressing societal problems not expressly linked with the environmental crisis such as poverty and the mistreatment of marginalized people, the pope said.

"They must be fought with comprehensive strategies that promote awareness of the fundamental fragility of our environments."

Pope Francis told the delegation, which included representatives from Cambodia's civil society and Bishop Olivier Schmitthaeusler, apostolic vicar of Phnom Penh, that interreligious cooperation is ultimately two-fold: it reconciles people with each other, enabling them "to live peacefully as brothers and sisters," and it reconciles them "to the environment in which they live."