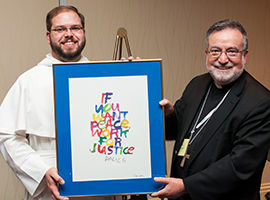 USCCB  >  About Us  >  Catholic Campaign for Human Development

Do you know a young faith-filled Catholic between the ages of 18-40 who has demonstrated leadership against poverty and injustice in the United States?

The Cardinal Bernardin New Leadership Award, an activity of the Catholic Campaign for Human Development, recognizes the leadership, energy and diverse skills that young people bring to the anti-poverty work of low-income projects and Catholic parishes. The Cardinal Bernardin New Leadership Award highlights the gifts of young leaders and their Gospel commitment to the poor.

Joseph Cardinal Bernardin (1928-1996) demonstrated strong leadership to fulfill the option for the poor in the US and to build bridges across ethnic, class, and age barriers. Cardinal Bernardin began his ministry at a young age and was ordained a bishop while still in his thirties. In his role as the first bishop named General Secretary of the NCCB/USCC, he nurtured the vision for the Catholic Campaign for Human Development and helped to shepherd it through its first years. He remained a strong supporter of CCHD while serving as Archbishop of Cincinnati and Cardinal Archbishop of Chicago. It has been said about Cardinal Bernardin that his gift was a vision to build consensus "that doesn't just settle for what already exists, but moves us ahead to what is possible."

The Bernardin Award is designed to

The award would be given to a young Catholic, age 18-40, who demonstrates all of the following:

Nominations may be submitted by a pastor, university faculty or staff, a local CCHD Diocesan Director, a CCHD-funded project, a mentor, or a colleague.

National CCHD will seek endorsement by the local Catholic bishop prior to determining recipients.

One award recipient will be chosen and notified by mid-October.

Specific questions can be addressed to Marthamaria Morales via email or by phone (202) 541-3372.

Watch Videos of Past Winners