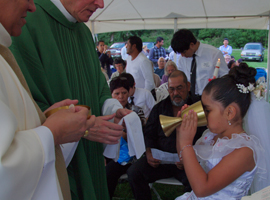 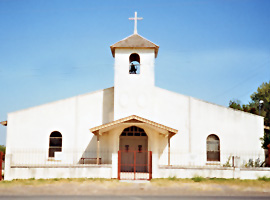 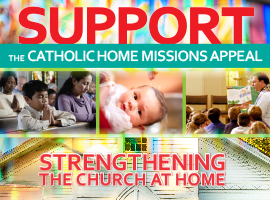 Read about how mission dioceses across the U.S. are fostering and supporting priestly vocations.

Give to the Catholic Home Missions Appeal.

Use one of our resources to promote the Appeal.

What Are Home Missions?

To learn more about the home missions, visit our new online map.

Where are the home missions?

Surprisingly, the Catholic Church is poorly established in many parts of our country, especially Appalachia, the South, the Southwest along the Mexican border, the Rocky Mountain States, Alaska, Puerto Rico and the Virgin Islands, and remote island chains like the Marshalls and the Carolines in the Pacific. Generally speaking, the home missions are everywhere that Catholics are few and the Church is fragile.

Let's begin our tour in southern Illinois in the diocese of Belleville. East St. Louis-Belleville is the only metropolitan area in the diocese, but it is also one of the poorest communities in the nation. The Sister Thea Bowman Catholic School (STBCS) provides the only alternative to the troubled public school system. The population of the STBCS elementary school is comprised of 99% racial minorities. In addition, 90% of the families fall below the poverty line and only 4% are Catholic. The children are often raised by someone other than their biological parents and know the realities of drugs, violence, and crime.

Funding from Catholic Home Missions Appeal helps STBCS to continue providing the best holistic Catholic education possible for the children enrolled and is a vehicle for evangelization. Despite the challenges that the children at STBCS face, 100% of its graduates enter high school, and 95% of its graduates are enrolled in college or university. This program and many more give testimony to the great benefit of the Catholic Home Mission Appeal.

Across the country, in the Diocese of Great Falls-Billings in Montana, 99 parishes and missions stretch over 90,000 square miles. Many priests in the diocese serve multiple parishes, some serve up to five! Many parishes cannot meet the financial obligations of having a full-time priest and communities often feel disconnected from the larger Church. With support from the Catholic Home Missions Appeal, the diocese ensures priests can make the necessary travel to serve their flocks and parishes can keep their doors open. The support from this collection has touched the people in this diocese and allowed them to keep their faith communities active and connected to the universal Church.

Let's head south, to the western border of Texas to the Diocese of El Paso. The population within the Diocese of El Paso in West Texas is about 80% Catholic, one of the highest percentages of Catholics of any diocese in the United States, and more than two-thirds are Hispanic. However, the rural parishes experience poverty, extreme geographic isolation, and rugged terrain.

With funding from the Catholic Home Missions Appeal, two Missionary Sisters of Jesus have served five parishes, six missions, and nearly 4,000 Catholics through the West Texas Evangelization Program (WTEP). These two sisters are the only presence of consecrated women in the area, and with the shortage of priests, they do much to help strengthen the local Catholic communities. Through WTEP, the sisters have helped form small faith-sharing groups, conducted Lenten missions, and made door-to-door visits in the neighborhoods. WTEP also brought medical professionals to provide much-needed health and wellness presentations to these rural communities, which otherwise lack access to these resources.

Going farther west, past Los Angeles, beyond Hawaii, we arrive at the Marshall Islands. The Marshall Islands are a collection of atolls and islands covering an area of 500,000 square miles. Given the great distance between these islands, travel is often difficult and communication is unreliable. The islands themselves do not have any local priests and have only one local permanent deacon and sister; and so, the Missionaries of the Sacred Heart provide for the pastoral and sacramental needs of the Islands. Additionally, many people move to the United States after high school, making it hard for the Catholic Church there to find men interested in joining the priesthood.

Against those odds, the Marshall Islands welcomed with great joy a seminarian in 2014! Thanks to a grant from the Catholic Home Missions Appeal, they are able to afford to send him to seminary for his studies. Through his studies, he is a witness and example to other young men on the Islands.

Our tour could have touched any of eighty other home mission dioceses in the United States or in its dependencies in the Caribbean and Pacific. The Catholic Home Missions Appeal helps meet the faith needs of Catholics in the missions. It supports the education of priests, deacons, religious sisters and lay people, so the Eucharist and the word of God can nourish Catholics. It supports religious education, so Catholics can expand their knowledge of the faith and hand it down to the next generation. It helps small parishes stay alive.

Please help your fellow Catholics in the practice of their faith. Give generously to the Catholic Home Missions Appeal when it is taken up in your parish.