“We are the people of life because God, in his unconditional love, has given us the Gospel of Life… and we are called to act accordingly…” —Saint John Paul II, Evangelium vitae 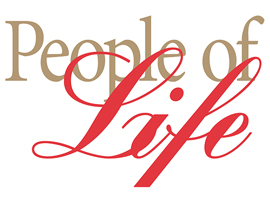 In his well-known pro-life encyclical, The Gospel of Life (Evangelium vitae), Saint John Paul II called us to be “people of life and for life.” Drawing its name from the Holy Father’s invitation, the People of Life campaign spreads the good news about the Church’s efforts to teach respect for all human life from the moment of conception until natural death.

As the Pro-Life Action Campaign of the Catholic Church in the United States, People of Life affirms our responsibility to serve God and others by protecting the most vulnerable among us: the unborn, the elderly, and all whose lives are threatened.

Our work is guided by the Pastoral Plan for Pro-Life Activities, which calls upon the Church—its people, services, and institutions—to pursue this effort in four major areas: public information and education, prayer and worship, public policy, and pastoral care.

While we are all called to be People of Life, the Church also recognizes individuals who have made significant contributions to building a culture of life where God has placed them. The People of Life award recognizes Catholics who exemplify the call by Saint John Paul II in The Gospel of Life (Evangelium Vitae, 1995) to dedicate themselves to  promoting respect for the dignity of every human person. Be inspired by viewing the list of past awardees.

Our combined efforts as People of Life involves  clergy, religious, and lay persons. We invite people like you, People of Life, to collaborate in this important effort to build a culture that welcomes, respects and protects every human life. For news about the pro-life work of the Church, and to help build a culture of life through prayer and action, sign-up for our free e-subscriptions or our direct mail campaign.