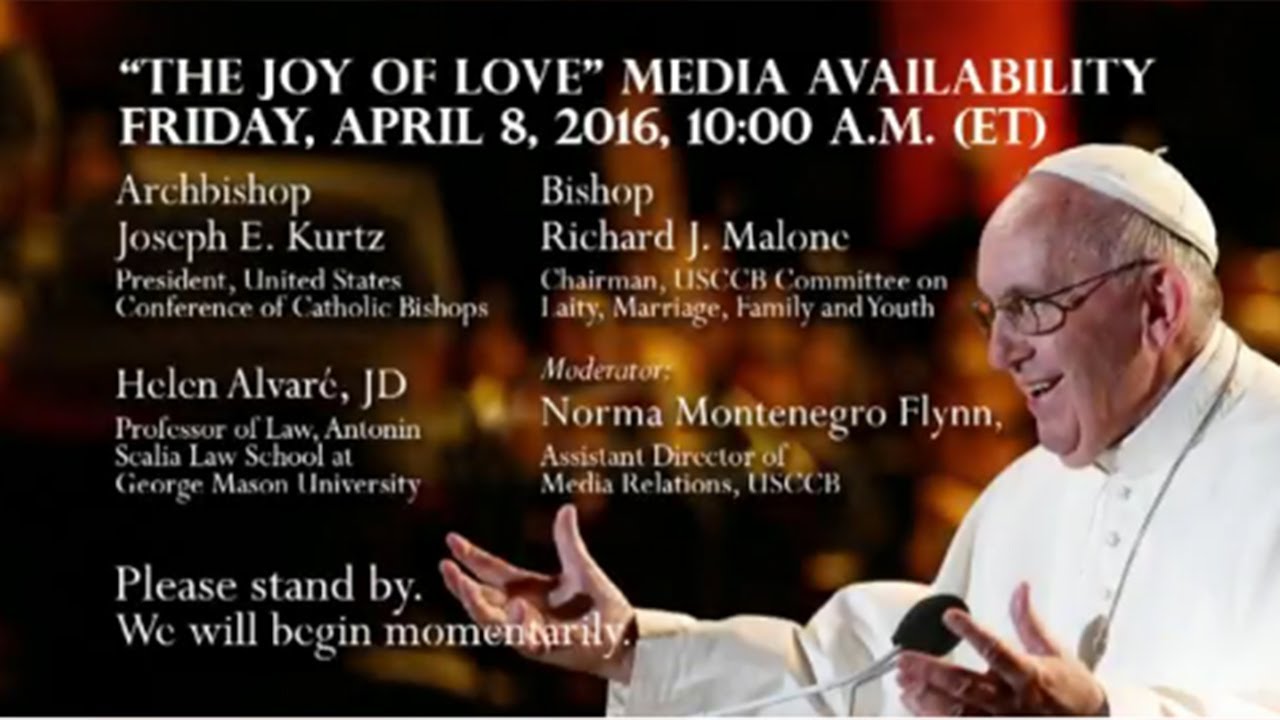 WASHINGTON—Archbishop Joseph E. Kurtz of Louisville, Kentucky, president of the U.S. Conference of Catholic Bishops, issued a statement [on September 27, 2016] about the ongoing, fruitful reception and implementation in the United States of Pope Francis' Post-Synodal Apostolic Exhortation, Amoris Laetitia.
FULL STATEMENT
Report on Reception and Implementation of Amoris Laetitia in the United States (September 2016)

WASHINGTON-Pope Francis' new apostolic exhortation, Amoris Laetitia (The Joy of Love), released April 8, brings "a rich reflection on the mission of the family and on how the Church can equip couples to embrace God's vision for marriage and can offer healing for families who are struggling," said the chairman of the U.S. Conference of Catholic Bishops' (USCCB) Committee on Laity, Marriage, Family Life and Youth.
FULL RELEASE EN ESPAÑOL

VATICAN CITY (CNS) -- The same mercy and patience that are essential for building a strong family must be shown to those whose families are in trouble or have broken up, Pope Francis said in his highly anticipated post-synodal apostolic exhortation.
FULL STORY

A little bit country: Pope looks at the nitty-gritty of family life

VATICAN CITY (CNS) -- Pope Francis' hymn to love and family life is more like a country song than a Disney tune.
FULL STORY

VATICAN CITY (CNS) -- The Vatican has set April 8 for the release of "Amoris Laetitia" ("The Joy of Love"), Pope Francis' reflection on the family and family life.
FULL STORY

What is an apostolic exhortation?

An apostolic exhortation is a particular kind of papal teaching that communicates the mind of the pope on a certain topic. It is often used to share the conclusions reached by the Holy Father after consideration of the recommendations of a Synod of Bishops. It can also be used as a way for the pope to exhort (encourage) the faithful to a deeper life of Christian discipleship, as, for example, Pope Francis did in his apostolic exhortation Evangelii Gaudium on the proclamation of the Gospel in today's world (Nov. 24, 2013).

Where did Amoris Laetitia come from?

Amoris Laetitia is the result of Pope Francis' prayerful reflection on the discussions and outcomes of two synods of bishops held in Rome: an Extraordinary Synod in 2014, and an Ordinary Synod in 2015, both on the topic of marriage and the family. The exhortation is meant to share with the Church the Holy Father's teaching and encouragement regarding pastoral ministry to families, and what marriages and families are called to at this time in history.

What is the Synod of Bishops?

The Synod of Bishops is a permanent institution of the Catholic Church. It was established by Pope Paul VI in 1965, shortly after the close of the Second Vatican Council, to continue the spirit of collegiality and communion that was present at the Council. The Synod is an assembly of bishops from around the world who assist the Holy Father by providing counsel on important questions facing the Church in a manner that preserves the Church's teaching and strengthens her internal discipline. (See the Vatican website and the Code of Canon Law, canon 342.)

What topics does the apostolic exhortation cover?

Amoris Laetitia covers a wide range of topics related to marriage and family life, with a particular emphasis on the family's vocation and mission of love. It speaks about the family's strengths and gifts, and also the contemporary challenges faced by families throughout the world. The exhortation encourages married couples, families, and pastoral ministers to accompany and care for families and others in need of the Lord's mercy and healing. It includes an extended reflection on love and what it means in the day-to-day reality of marriage and family life.

What does the title mean?

"Amoris Laetitia" is Latin for "The Joy of Love." The opening sentence reads, "The Joy of Love experienced by families is also the joy of the Church" (no. 1). The exhortation is meant to echo the conviction of the Synod Fathers that the Christian family is "good news indeed" (no. 1) and to help the Church to draw close to families in all situations.

Who should read this apostolic exhortation?

This document is for all who care about the future of the family. It is addressed to Bishops, priests, deacons, consecrated persons, Christian married couples, and all the lay faithful. In particular, married couples can be reminded of their call and mission through this exhortation, and families can find it an ongoing source of inspiration.

How can the apostolic exhortation be utilized by Catholic leaders?

Amoris Laetitia will be a valuable guide for all those engaged in ministry to those discerning and preparing for marriage and to married couples and families at all stages. Catholic leaders would do well to study Amoris Laetitia in its entirety, being attentive to how the Holy Father's insights may enrich and enliven a particular ministry. Pope Francis himself has urged a patient and careful reading of the document, with the hope that "in reading this text, all will feel called to love and cherish family life…" (no. 7).

How has Pope Francis shown a concern for the family in his pontificate?

Pope Francis has shown his love for marriages and families in many ways. In the first year of his papacy, he called for two consecutive synodal assemblies on the family. He devoted over a year's worth of weekly audiences to topics related to marriage and the family, and he gave stirring testimony to the beauty of God's plan for the family during the World Meeting of Families in Philadelphia. He also canonized Pope St. John Paul II, whom he called the "pope of the family."

What are other key documents from the Church on marriage and the family?

As Pope Francis shows in chapter three, Amoris Laetitia follows upon a rich treasury of Church teaching on marriage and the family. This apostolic exhortation is a parallel and complement to the 1981 document Familiaris Consortio ("Regarding the Role of the Christian Family in the Modern World"), issued by Pope St. John Paul II after the synod on the family in 1980, which has been a touchstone for marriage and family life ministry since its publication. John Paul II gave the Church another document for families in 1994, entitled "Letter to Families," and his catechesis on human love, commonly called the "theology of the body," has also deeply enriched the Church's contemplation on marriage and family life today. All of these works are cited at various points in Amoris Laetitia. Other key documents, also cited, include the Second Vatican Council's Pastoral Constitution Gaudium et Spes (On the Church in the Modern World), Bl. Pope Paul VI's Encyclical Letter Humanae Vitae (On Human Life), and Pope Emeritus Benedict XVI's encyclical Deus Caritas Est (On Christian Love).

How can I get a copy of the apostolic exhortation?

Amoris Laetitia is available for purchase through the USCCB store. It can also be read in its entirety on the Vatican website.