Solemnity of Christ the King: Background

Solemnity of Christ the King: Background

About Christ the King

On the last Sunday of each liturgical year, the Church celebrates the Solemnity of Our Lord Jesus Christ, King of the Universe, or Christ the King.

Pope Pius XI instituted this feast in 1925 with his encyclical Quas primas (“In the first”) to respond to growing secularism and atheism.  He recognized that attempting to “thrust Jesus Christ and his holy law” out of public life would result in continuing discord among people and nations. This solemnity reminds us that while governments come and go, Christ reigns as King forever. 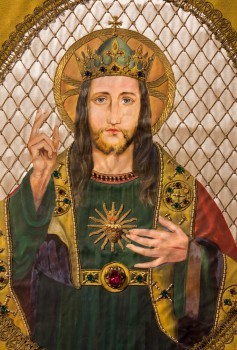 During the early twentieth century, in Mexico, Russia, and some parts of Europe, militantly secularistic regimes threatened not just the Catholic Church and its faithful but civilization itself. Pope Pius XI’s encyclical gave Catholics hope and—while governments around them crumbled—the assurance that Christ the King shall reign forever.  Jesus Christ “is very truth, and it is from him that truth must be obediently received by all mankind” (Quas primas, 7).

Christ’s kingship is rooted in the Church’s teaching on the Incarnation.  Jesus is fully God and fully man.  He is both the divine Lord and the man who suffered and died on the Cross.  One person of the Trinity unites himself to human nature and reigns over all creation as the Incarnate Son of God.  “From this it follows not only that Christ is to be adored by angels and men, but that to him as man angels and men are subject, and must recognize his empire; by reason of the hypostatic union Christ has power over all creatures” (Quas primas, 13).

The Church calls us to acknowledge Christ’s kingship with our whole lives:

Today, religious freedom for many people means that we can believe whatever we want in private, but when we enter the public square or the marketplace, we may not speak of anything that relates to our faith.  However, the Church acknowledges the reign of Christ, not only privately, but publicly.  This solemnity encourages us the celebrate and live out our faith in public.  “Thus by sermons preached at meetings and in churches, by public adoration of the Blessed Sacrament exposed and by solemn processions, men unite in paying homage to Christ, whom God has given them for their King” (Quas primas, 26).

For Christians, when our faith is repeatedly marginalized in public life, we can fall into the habit of compartmentalizing our lives.  We love Jesus in our private lives, but we shrink from acknowledging the kingship of Christ in social life.  When we celebrate the Solemnity of Christ the King, we declare to the world and remind ourselves that Jesus is the Lord of the Church and of the entire universe.