1 – Feast of St. Therese of Lisieux

St. Therese is one of the principle patrons of World Youth Day pilgrims from the United States, especially those who celebrate stateside. She is the patron of the missions and missionaries, as she kept constant prayer for their good works. Check out her bio at the Patron Saints of WYDUSA page.

Established by the United Nations on the birthday of Mahatma Gandhi, leader of the Indian independence movement and spiritual leader in the philosophy of nonviolence. Pray for the victims and perpetrators of violence. Find out more at the United Nation's website.

This special Sunday has been set aside to remember the sanctity of all human life from conception to natural death. The USCCB offers resources and programming to take part in this movement.

Saint John Paul II visited Newark, New York, Brookyln, and Baltimore for this five-day visit to the United States of America.  He intentionally visited every place he set foot on, even airports! Check out this list of airports visited by Saint John Paul II and consider them in your travel plans.

One of the patrons of WYD Sydney (2008) and WYD Krakow (2016), St. Faustina was a Polish nun who received the revelation from Christ of the devotion of Divine Mercy.  From this, we have Divine Mercy Sunday, the Chaplet of Divine Mercy, and other spiritual resources. Read more about its origin, the image, and spiritual meditations.

Christopher Columbus landed in the Americas in 1492, bridging Europe and the New World.

One of the patrons of WYD Sydney (2008) and WYD Madrid (2011) and Doctor of the Church. One of her most acclaimed works is The Interior Castle. Read an article about how her text engaged with aging religious.

Today the Church re-commits itself to the missionary lifestyle. We pray for all missionaries today, and that all World Youth Day pilgrims may truly become missionary disciples. Check out these resources from the USCCB.

On this day in 2012, Pope Emeritus Benedict XVI released his message for World Youth Day in Rio (which he would not attend due to his historic papal retirement the following February). In this message, he called young people to contribute to the life of the Church by demonstrating their enthusiasm for and love of Christ to the world.

Jesuit priest, missionary, and martyr, and one of the patrons of the North American continent. Find more information about him, including prayers, on this list of American Saints and Blesseds. 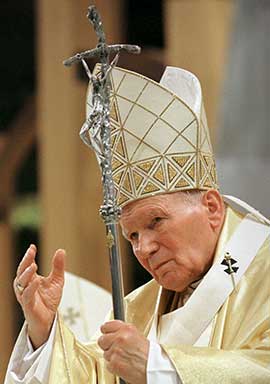 One of the primary patrons of all youth and young adults, and the founder and patron of World Youth Day. He has been designated as one of the principle patrons of WYD pilgrims from the United States. St. John Paul II is an icon in the history of the Catholic Church from his origins in Poland, to his service as Archbishop of Krakow, to his pontificate from 1978 to 2005. Read more about this saint's heroic life and missions.

In 1988, the USCCB designated the Thirtieth Sunday of Ordinary Time as a day set aside for local celebrations of youth and young adults; pray for all young people across the country.

28 – Feast of Saints Simon and Jude

On this day in honor of these two great apostles of Jesus, take time to pray for those who are zealous for their faith and for hopeless causes. Read Pope Francis' morning meditation on the feast of Saints Simon and Jude from 2014 entitled, "Catholic, but not too Catholic."

One of the patrons of WYD Rio (2013), she joined the Focolare movement at a young age, and soon after found out she had contracted cancer. Read more about this saintly teenager's life.