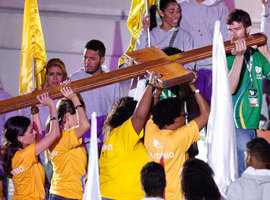 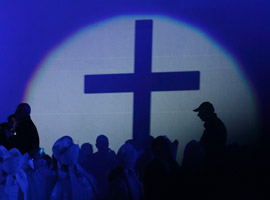 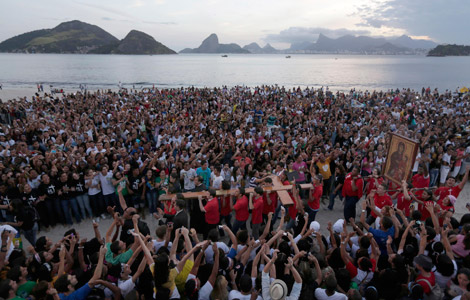 The official WYD Cross and Marian Icon made a multi-city tour across the United States August 19-27, 2018. The tour included stops in Chicago, Miami, Houston, Washington DC, and Los Angeles.

The Cross has traveled around the globe since 1984, when St. John Paul II gave it to young people. It has been part of every World Youth Day celebration beginning with the first official WYD event in Rome in 1986. In 2003, St. John Paul II presented the world's youth and young adults with a Marian Icon, under the title of Salus Populi Romani, which has accompanied the WYD Cross for the past fifteen years.

In 2002, the Cross came to Ground Zero in New York City for a brief visit to bring comfort to the nation's young people in the aftermath of the 9/11 terrorist attacks. Prior to that, the Cross last traveled the United States in 1993, in advance of WYD in Denver twenty-five years ago. This is the first time the Marian Icon will come to the United States.

Stay tuned for pictures and more details from the events in each city.

The World Youth Day Cross and Icon were displayed at Holy Name Cathedral throughout the day on August 20 and venerated by the faithful who attended the many Masses and prayer services held around the visit.

Bishop Caggiano, of Bridgeport, celebrated Mass and led a prayer service in the evening before sending the Cross and Icon off to their next stop in Miami.

Read more at Chicago Catholic and listen to Bishop Caggiano's homily from the closing Mass.

"It is the bond of divine love, of Father, Son and Spirit who dwells in your heart and mine since baptism that allows us to be one in Christ."
- Bishop Frank Caggiano

The World Youth Day Cross and Icon traveled around Miami for a mid-day prayer rally with youth, afternoon Mass for vocations with seminarians and religious, and an evening of prayer and adoration with young people.

Archbishop Ulloa, of Panama, joined the Archdiocese for this day of prayer and celebration that gathered hundreds of people - some preparing for their first WYD this January and others remembering the impact it had on their own faith journey.

Read more at Florida Catholic and listen to Archbishop Ulloa's address during the evening of prayer and reflection.

"To follow Christ, we must be like Mary. We must be brave."
- Archbishop José Domingo Ulloa Mendieta

After returning to the Co-Cathedral, worship was led by choirs from different language communities, including Spanish, Vietnamese, and Filipino choirs, before a Liturgy of the Word service led by Auxiliary Bishop George Sheltz.

"We are called today to be the servants of the Lord... Will it be easy? No, (but) as long as you put your focus on that cross, you know that all things can be conquered."
- Bishop George Sheltz

The WYD Cross and Icon were carried throughout our nation's capital by young people from different dioceses, cultural groups, and ministries. Accompanied by bishops, the group stopped at different monuments on the National Mall to offer prayers for our Church and the world.

In the afternoon, hundreds gathered at the St. John Paul II National Shrine for prayer, adoration, confession, and talks, ending with a keynote by Sr. Miriam James, SOLT before processing to the Basilica of the National Shrine of the Immaculate Conception for a closing vigil Mass celebrated by Archbishop William Lori, of Baltimore.

Read more at Catholic Standard and listen to the keynote speech by Sr. Miriam James, SOLT.

"You walked seeking to do the Lord's will…seeking to embrace your vocation. All of us this evening should share the hope and the joy of our young pilgrims."
- Archbishop William Lori

The arrival of the Cross and Icon in Los Angeles was celebrated by Archbishop José Gomez during a Mass at the Cathedral of Our Lady of the Angels. During the Mass, Archbishop Gomez blessed all pilgrims preparing for WYD 2019 in Panama.

After the Mass, a prayer rally was held on the Cathedral's plaza and the Cross and Icon were available for veneration through the following day.

Read more at Angelus News and listen to Archbishop Gomez's homily from the Mass.

"God loves you. No questions asked. Every one of us, even in our weaknesses, even in our sinfulness, even when people turn their backs on God he does not abandon them. He's always there. And the Cross is the proof."
- Archbishop José Gomez 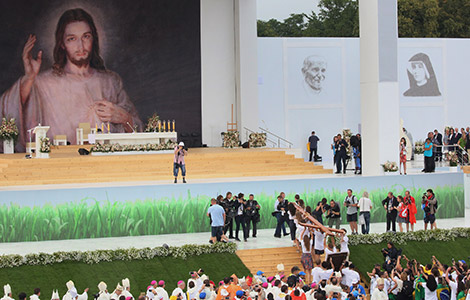