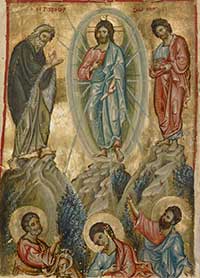 6 – Feast of the Transfiguration of the Lord

The Transfiguration is the guiding image of the World Youth Day pilgrimage, which is truly a mountaintop experience where we are transformed and inspired for mission. Read a homily from St. John Paul II about the Transfiguration, or Pope Francis' Angelus address to pilgrims after WYD Rio, where he mentions the Transfiguration.

On this day in 2004, St. John Paul II released a message to remind young people to spiritually prepare for their journey ahead. Like Moses at the end of his life, the Holy Father would not make it to the Promised Land with the young people, as he died in April of the following year. His successor, Pope Benedict XVI, would accompany the pilgrims to Cologne. On this day, pray for our elders and those who share great wisdom with us for our pilgrim journey in life.

One of the patrons of WYD Sydney (2008). Read about Pope Emeritus Benedict XVI's devotion to her.

9 – Feast of St. Teresa Benedicta of the Cross

One of the patrons of WYD Cologne (2005). Read about the saintly life of this Jewish convert who was martyred during World War II.

You received a spirit of sonship. (Rom. 8:16). Check out the Vatican Archives for homilies and messages from WYD Czestochowa. 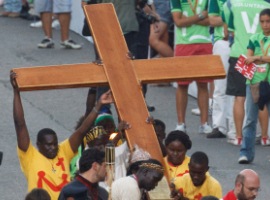 I came that they might have life, and have it abundantly (John 10:10); during these days, pray for World Youth Day alumni from the United States since 1984, especially those who participated in WYD Denver. Check out the Vatican Archives for homilies and messages from WYD Denver.

Begun in 1985, the International Day for Youth celebrates the young people of the world; this movement inspired St. John Paul II to continue an annual celebration of youth and young adults in the Roman Catholic Church. Read more.

One of the patrons of WYD Rio (2013). Read an Apostolic Exhortation from St. John Paul II about the Church in Africa, where he mentions this saint from the Democratic Republic of the Congo.

15 – Solemnity of the Assumption

The Blessed Mother was assumed, body and soul, to become the Queen of Heaven. Pope Emeritus Benedict XVI gave an insightful homily on this solemnity in 2011.

I am the way, the truth, and the life. (John 14:6). Check out the Vatican Archives from this worldwide celebration.

The Word became flesh and made his dwelling among us (John 1:14). Check out the Vatican Archives for more from WYD Rome.

We have come to worship him. (Matt. 2:2). Check out the Vatican Archives for more from WYD Cologne. 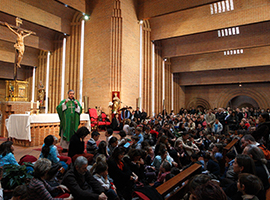 Rooted and built up in Jesus Christ, Firm in the faith. (Col. 2:7). Check out the Vatican Archives for more from WYD Madrid.

Teacher, where are you staying? Come and see. (John 1:38-39). Check out the Vatican Archives for more from WYD Paris.

The official World Youth Day Cross and Marian Icon makes a multi-city tour to Chicago, New York, Miami, Los Angles, and Washington D.C in August 2018. View more details on the events of the WYD Cross in the U.S.

Pray for all families, and ask God to guide and bless the participants and their families. Learn more about the World of Meeting of Families in Dublin.

One of the patrons of WYD Rio (2013). Cardinal Tarcisio Bertone's homily, given in 2007 at her shrine in Lima, discusses this great saint.

26 – Feast of Our Lady of Czestochowa

One of the patrons of WYD Czestochowa (1991); each year, pilgrims depart Warsaw for a nine-day, 140-mile trek to the Shrine of Our Lady of Czestochowa. When he was a young student during World War II, St. John Paul II made this pilgrimage trek in secret as to avoid Nazi suspicion.  Read St. John Paul II's prayer at her shrine from June 4th, 1997.

One of the patrons of WYD Rio (2013). Read Catholic News Agency's article on this thirteenth century saint.